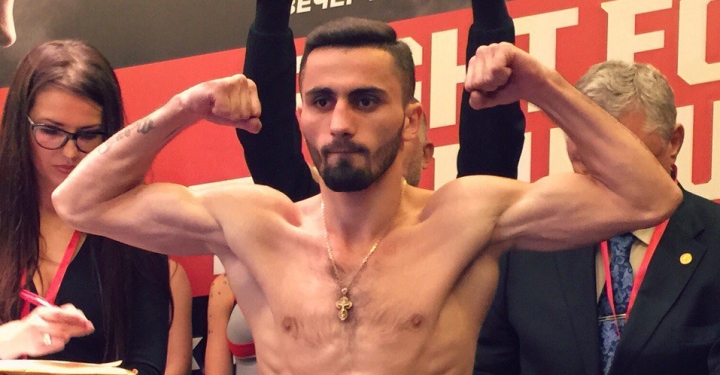 It was a classic encounter between a fighter under pressure (Shakhnzarayan) with smooth power and a natural motor (Sarukhanyan) with a questionable chin and little power. Sarukhanyan was a very elusive target, continually frustrating Aik with his unorthodox moves, dodging, body feints, and a bit of drug rope technique.

Shakhnazaryan is listed 5’5 and a half at BoxRec, half an inch taller than his nemesis, but Vage looked much taller as he was fighting high while Aik dodged a bit while also getting a smaller target. Still Vage’s jab was in his face for the first half of the fight. Points won, Sarukhanyan seemed to have the upper hand at the halfway point.

Continued pressure and occasional body punches caused Vage’s stamina to drop after the fifth. Shakhnzaryan’s attacks were more successful, his punches definitely capturing Vage’s attention. Sarukhanyan continued to shoot well with his left hand, but Aik started crossing it more often than before.

In the eighth round he landed several hard punches to force Vage back, and his best moment came in the ninth when Vage was momentarily shaken and forced to seek cover in a clinch. Aik failed to do the job but still looked better on lap ten.

The fight was very balanced, and the two boxers could have seen their hand raised by referee Alexander Kalinkin.

Aik “Kadj” Shakhnazaryan won in an all-Armenian and all-Russian clash with a majority decision: 95-95, 97-95 and 96-94. BoxingScene saw it 96-95 – for Sarukhanyan, who asked for rematch in a post-fight interview.

Former WBC cruiserweight champion Grigory Drozd was the organizer of the event, which was officially promoted by promotion companies Rus Boxing and A Angels and supported by the huge Armenian diaspora.