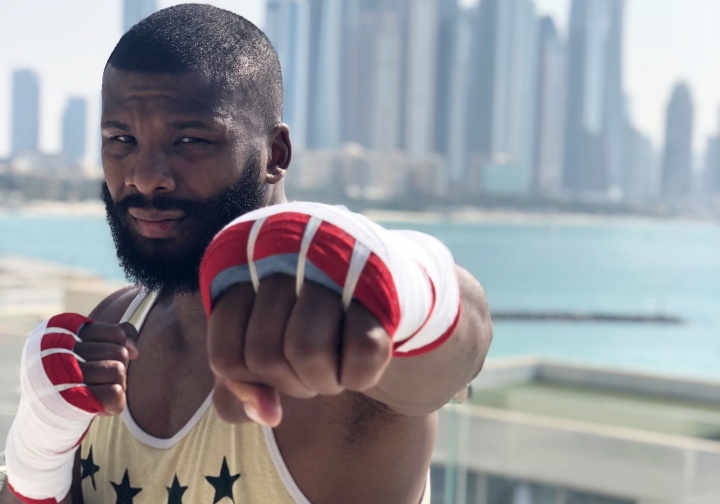 Two-division world champion Badou Jack will be preparing to make another run for championship gold with his sights set on a heavyweight title as he returns to action on Saturday May 14 on the undercard.” The Global Titans Fight Series” available on PPV via LIVENow from the helipad of the opulent Burj Al Arab hotel in Dubai.

“My goal is to cement my legacy and win a world title in a third weight class,” said Jack, a longtime protege of Floyd Mayweather throughout his championship run.

Jack will take on Hany “Egyptian Hurricane” Atiyo ahead of the main event showdown which will see the legendary boxing Hall of Famer and “TBE – The Best Ever” Floyd “Money” Mayweather in an exhibition match against the undefeated” Dangerous” Don Moore.

“Any fight that Floyd Mayweather is involved in will be historic,” Jack said. “Floyd is always watching over me and I always appreciate everything he has done for my career. This will be yet another unforgettable event and I am proud to be on the card.

Born in Sweden to a father of Gambian descent, Jack represented Gambia at the 2008 Olympics before embarking on his winning career. Throughout his career, Jack has made Dubai a second home, promoting a fight in the country while doing humanitarian work in the Middle East. Jack had already fought in Dubai in his last outing, knocking out Samuel Crossed in November 2021.

“Dubai is my second home, I love being here,” Jack said. “This will be my second fight in Dubai and my fan base here is still so supportive. Badou Jack Promotions promoted our first fight here in 2019 and the boxing scene is growing more and more every month here. Our work with the Badou Jack Foundation also continues in the region, through Jordan, Syria, Gambia, refugee camps and orphanages, we are on a mission to give children everywhere a fighting chance. in life.

After winning world titles at super middleweight and light heavyweight, including competing in several contenders in the fight of the years against Jame DeGale, Adonis Stevenson and Jean Pascal, Jack now has his sights set on moving to the weight limit of 200 pounds to capture a title there. Jack held his entire training camp in Dubai, continuing his efforts to support the sport in the region.

“Training camp went really well with my whole team in Dubai,” Jack said. “We are always very comfortable being here. It’s really an easy process to have a camp here. My head coach Johnathon Banks has sited every fight I’ve had, so I feel good and I’ll definitely be 100% on fight night.

Jack will face an Egyptian native who now resides in Dubai in Atiyo, who is over 6’2” tall and has fought at cruise weight since 2014. For Jack, he feels confident in the new weight class and plans to make a dominant statement against Atiyo.

“I feel like I have a lot more energy and strength at this weight,” Jack said. “It’s the best I’ve ever felt in my career. I don’t know much about Atiyo other than the fact that he’s a natural cruiserweight. It doesn’t matter who’s in front of me, it’ll be the same result the May 14. I leave the ring with my hand raised.