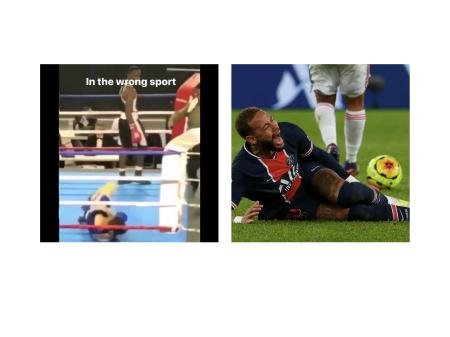 Boxing, being the combat sport that it is, is often associated with heavy hitting and body punishment among its fans. The sport, over the years, has witnessed jaw-dropping power punches and devastating knockouts inside the ring. In this particular fiesta, Muhammad Ali, Mike Tyson, the newest Tyson Fury and Deontay Wilder – all demonstrated the overwhelming strength of the fist.

It has neither a round ball nor a pair of cleats. Although physique in other sports is considered unfair and seen as a fault, sports like boxing rely entirely on the will to hurt and the ability to endure pain and fatigue. Honestly, if you can’t stand the pain, boxing is definitely not the sport to go for.

A video has recently gone viral on social media in which viewers see a boxer rolling on the floor, screaming out loud in what seems like unbearable pain. Two boxers, one in a blue singlet and the other in a black face-off before the referee starts the fight.

While the referee is still busy talking to other officials, the pair come to a point where the one in black subtly bumps his forehead against that of the one wearing blue. Following this, the boxer dressed in the blue underpants intentionally falls to the ground and lets out a handful of painful cries.

Fans who reacted to the clip

Several fans on social media reacted to the clip. Here are some reactions that stand out and are therefore worth mentioning.

A named user Fouad Fredericks commented, “Well, the guy in black should be disqualified.”

There is no sport that allows headbutts. Although boxing is a contact sport, depending on the injury the referee may deduct points or even decide to disqualify the fighter for attempting foul play such as a headbutt.

Honestly, the laughs started when a user named Rob Rob commented, “The art of fighting without fighting…..lol.”

For those who didn’t get the reference, the writer hints at Bruce Lee’s famous quote from the movie. Enter The Dragon.

Where everyone kept the scene a little lighthearted, someone called Billie Howie got a little serious. He wrote, “That kid’s gonna wish he never took that dip, Damn shame🤦🏻‍♂️.”

At that, what was inevitable was a football/soccer joke. Well, the fans took good care of it.

Unsurprisingly, someone named Llendray Bertrand wrote, “He just thought he could win a football match while the referee was on his back. Mdr.”

The Neymar reference that had to be on screen

Speaking of football, who could help but hint at Brazilian superstar Neymar?

Well, what do you think of the clip? Also, do you think the reference to Neymar was fair? Let us know in the comments below.