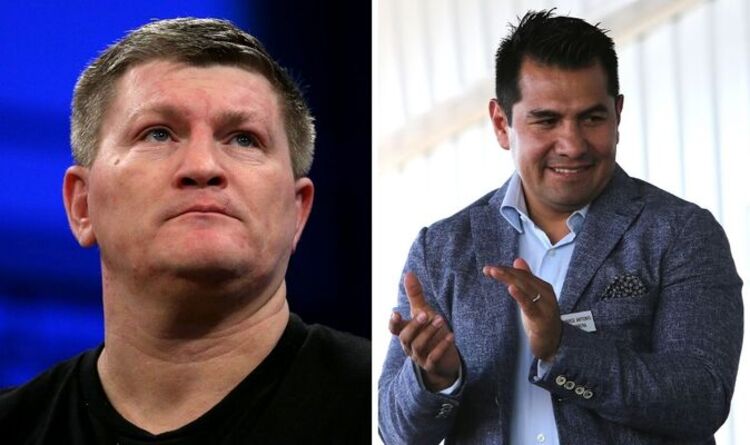 British boxing legend Ricky Hatton is in advanced talks over a sensational exhibition comeback fight against 48-year-old great Marco Antonio Barrera, according to reports. The Hitman, who retired for the second time in 2012 following his loss to Vyacheslav Senchenko in Manchester, is targeting a potential return to the ring later this year as talks between the two sides continue.

Hatton goes to the gym regularly and is on the road often to maintain his fitness level.

Now, an unexpected return to the sport has potentially become a serious proposition as Hatton prepares to follow in the footsteps of fellow boxing legends Mike Tyson, Roy Jones Jr and Evander Holyfield as they come out of retirement.

The Manchester icon has already made it clear he supports exhibitions, saying last year: “I’m all for those dream fights that we keep hearing about.

“I have young people who come to me and say, ‘I watched your fights on video but I’ve never seen you live!’

“And I think that’s why I’m a fan of these shows.

“You’re not going to see your heroes get seriously injured, it’s a chance to see them show off their skills one last time and you can also raise some money for charity, so I’m all for it. OK.”

Now The sun report that Hatton’s side are in advanced discussions with representatives of Barrera over an unlikely matchup, although a deal has yet to be finalized.

The Mexican Hall of Famer hasn’t fought professionally since 2011, when they managed to stop Jose Arias in Guadalajara.

Barrera has a record of 67 wins and seven losses, the last of which was in Manchester against Amir Khan in 2009.

Hatton and his potential opponent were beaten by Manny Pacquiao during their respective careers but never shared the ring against each other.

The duo maintained a close relationship throughout their careers in the professional ranks, however, and in November 2005 Hatton invited Barrera to Sheffield to watch him unify the light-welterweight division against Carlos Moussa.

Ray Hatton, Ricky’s father and trainer at the time, told Seconds Out: “Ricky saw a few fights against Barrera and Marco really looked after us, so we were happy to return the favor.

“Marco stayed in England, he came to Manchester and we took him out for a few meals with his family and had a great time.”

Now, just over 16 years later, both legends could be ready to climb the ropes for one final payday.

Hatton has focused his efforts on helping other fighters in recent years, including his son Campbell, who signed a pro deal with Matchroom Boxing in December 2020.

The 21-year-old improved to 5-0 in December after beating Attila Csereklye in Bilbao after boxing Sonni Martinez in front of more than 60,000 Tottenham fans under the card of Anthony Joshua’s unsuccessful world title defense against Oleksandr Usyk last September.