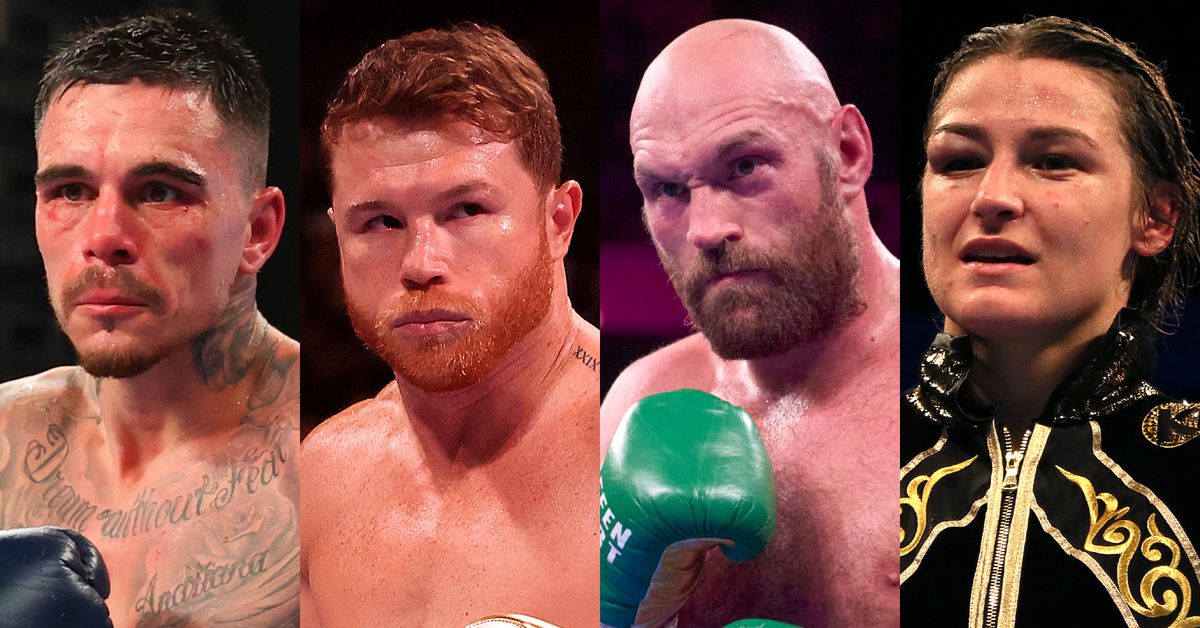 The rankings go up on Monday. There will be no update next Monday, the next one will be on January 17th.

Ranked fights the next two weeks:

To note: Some inactive fighters have been removed, as has the blueprint for this update. There are a few left – those with scheduled fights, like Gary Russell Jr; those who are strongly suspected of having a fight about to be formalized, such as Daniel Jacobs; and those who have had fights recently called off due to COVID concerns, like Arsen Goulamirian, Gennadiy Golovkin, and Ryota Murata. These fighters have 90 days to get something planned, with the asterisk that another large-scale COVID disruption to the sport could change that plan. From there, the norm will be to withdraw combatants for inactivity after 18 months; I know most places are a year old normally, but boxing is a weird sport and these times are always weirder than normal.

Remarks: Noel Mikaelian falls due to inactivity and some slight shuffling otherwise. Arsen Goulamirian, as noted, has 90 days to plan a fight.

Remarks: Maxim Vlasov won a very busy fight against Felix Valera on December 24 in Russia, dropping Valera three times en route to the 10-round decision. Valera also lost a point in the ninth round for a foul, giving us the unusual final scores of 99-87 and 100-86 on two occasions.

Remarks: Danny Garcia is out due to being inactive and not having anything planned that has been reported or rumored, and in any case Garcia has said he plans to move up to 154 when he fights again. At No.10, at least for now, is Eimantas Stanionis, who will likely face Radzhab Butaev next. But we have to note the imminent return of Keith Thurman, who will face Mario Barrios on February 5 in another pay-per-view blockbuster from PBC and FOX, who continue to return the game of boxing to fans as promised. (Hey, it turns out I was right that Broadcast Television didn’t mean in 2015-present what it did in 1978, who knew? Who could’ve understood? Golly!) Thurman-Barrios probably meant result the winner, if not both, to obtain places in the 147 rankings. It depends on how the fight goes and all that, we’ll see when we see.

Remarks: On the subject of Thurman-Barrios, with Mario Barrios dropping to 147 in a month and the standings being cleaned up in the New Year, I see no reason to keep Barrios warming up a seat at 140 any longer. Viktor Postol, who hasn’t fought since August 2020, and Subriel Matias and Jack Catterall are also absent.

To note: To answer a possible question of why remove Mario Barrios at 140 and not Teofimo Lopez at 135, it is because Lopez has noted it will probably go up to 140, but that’s a wait for me. Teofimo should go up to 140, I think it’s clear, but I don’t think it’s a cold lock or anything. We will give this situation a little time.

Remarks: Kazuto Ioka did not dominate against Ryoji Fukunaga on December 31, but took the win and retains his place. The back-end shakes a bit; Kal Yafai and Jeyvier Cintron are out due to inactivity, with Yafai likely to transition to bantamweight upon his return anyway. Donnie Nietes is absent because he no longer looks like the fighter he used to be.

But those three, maybe even four places are there too for now. Kosei Tanaka had great success at lower weights, still somewhat unproven at 115 but with a solid victory over Sho Ishida, who is a good fighter himself. Andrew Moloney is a good fighter despite a lack of success against Joshua Franco. But yes, after the first six these places are ripe to be taken by a good momentum, or for these four to solidify.

Remarks: Erick Rosa arrived after a split decision victory over Vic Saludar on January 21. It was a WBA sanctioned fight in the Dominican Republic with a Dominican fighter and a Dominican judge making a scorecard extremely questionable. Think about what you want.