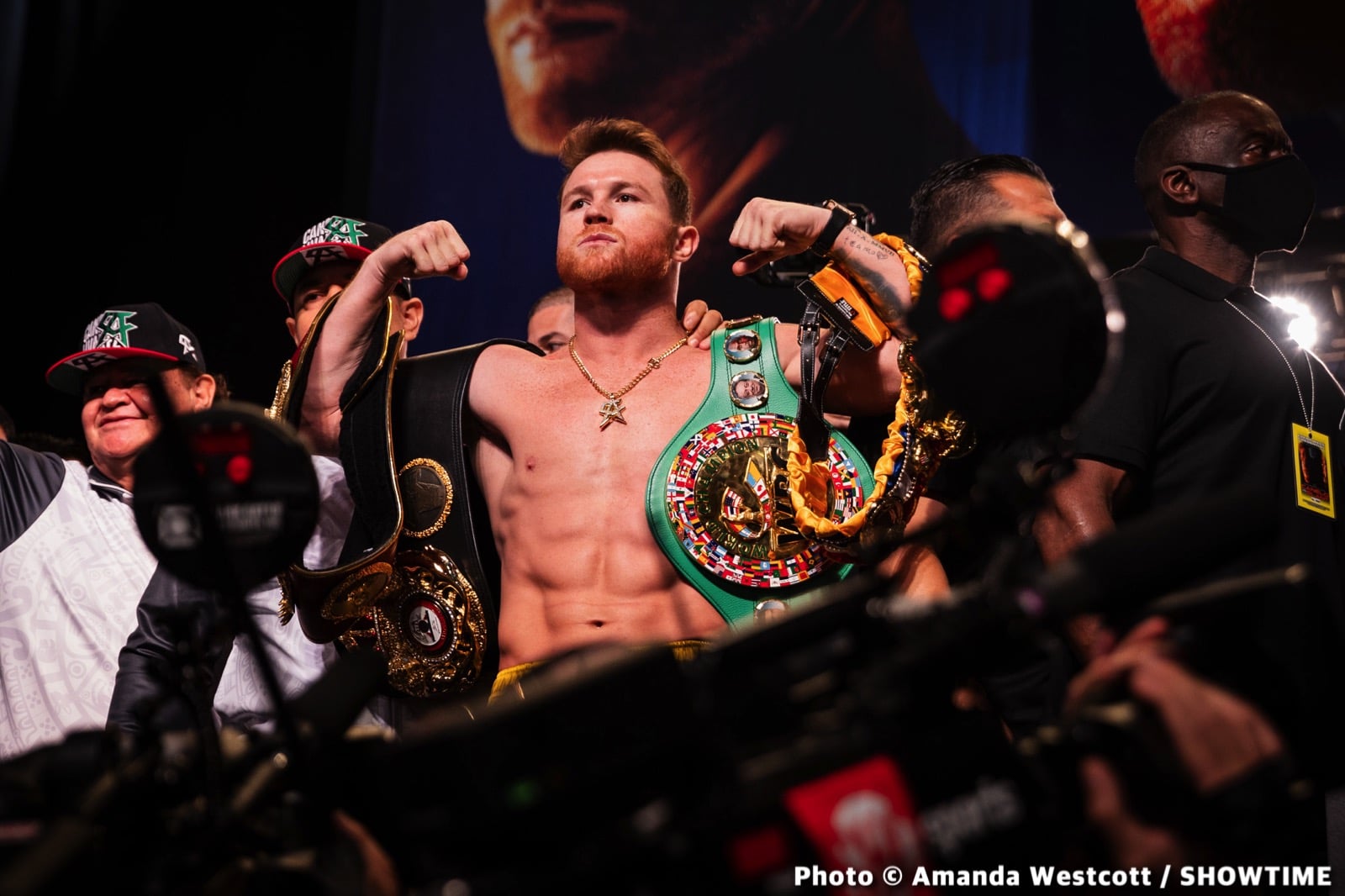 By Mark Eisner: Canelo Alvarez has accepted Matchroom’s two-fight deal to face Dmitry Bivol on May 7 and Gennadiy Golovkin on September 17 on the DAZN pay-per-view.

WBA light heavyweight champion Bivol has already signed the contract for the fight.

It may not make some boxing fans happy that Canelo’s fights with Bivol and Golovkin will be on DAZN PPV, as this was originally supposed to be a non-PPV platform, but they are changing over time.

G0lovkin still hasn’t signed due to some “issues” being resolved, according to Mike Coppinger.

Additionally, Golovkin (41-1-1, 36 KOs) has yet to win his April middleweight title unification bout against Ryota Murata in Japan. As long as IBF middleweight champion Golovkin wins this fight and signs the contract for the Canelo trilogy, he will be good to go.

“We are almost at the finish line now. I’m told Canelo has agreed to a two-fight deal with Matchroom,” Mike Coppinger told ESPN on Canelo Alvarez accepting the two-fight deal to face Dmitry Bivol on May 7 and Gennadiy Golovkin on September 17.

“The first fight is May 7 against Dmitry Bivol for the light heavyweight title then in September [17th]as long as GGG defeats Ryota Murata in a rescheduled world title fight in April.

“What I’m being told at the moment is that although Canelo has accepted and Dmitry Bivol signed the contract, GGG is trying to solve some problems on its side. It’s the heist right there on the side of GGG. I think it will be done in the next few days.

“PBC made two offers. One of them was a one-fight deal for $45 million to fight Jermall Charlo in May.

“They also had a two-fight deal for a second potentially fight David Benavidez in September, it would have totaled more than $100 million, but Canelo rejected that offer and the talks ended about ten days ago, and there has been no dialogue since,” Coppinger said.

Boxing fans are already complaining on social media that Canelo is “dodging” Jermall Charlo and afraid to fight him. This is obviously not the case. Canelo can still face Charlo once he finishes his two-fight deal with Matchroom.

It would fall to Canelo to hold off the fight against Jermall until he achieves his goal of becoming the undisputed champion at 175, as it will be difficult for him to bounce back from 168 to 175.

As things stand, Canelo will have his hands full as he drops from 175-168 to face Golovkin in September.

“Once GGG has signed the contract, the deal should close. But even then, Golvokin will have to pass Ryota Murata in a middleweight title unification in Japan in April,” Coppinger said.

Canelo may have been swayed by the chance to begin his quest to become an undisputed champion at 175, and that could be the reason behind his decision to accept the two-fight deal with Matchroom.

With boxing fans and DAZN still having intense interest in seeing the trilogy match with Golovkin, it only made sense that Canelo would give them what they wanted.

There are still boxing fans who insist that Golovkin deserved to win both fights. By accepting the two-fight deal, Canelo can finally show the fans that he is the better man.

Earlier, it was reported by ESPN Deportes that the venue for the May 7 Canelo vs. Bivol fight will be T-Mobile Arena in Las Vegas, Nevada.

This is the same location where Canelo fought for his two fights against Golovkin, as well as his fights against Amir Khan, Daniel Jacobs, Julio Cesar Chavez Jr. and Erislandy Lara.