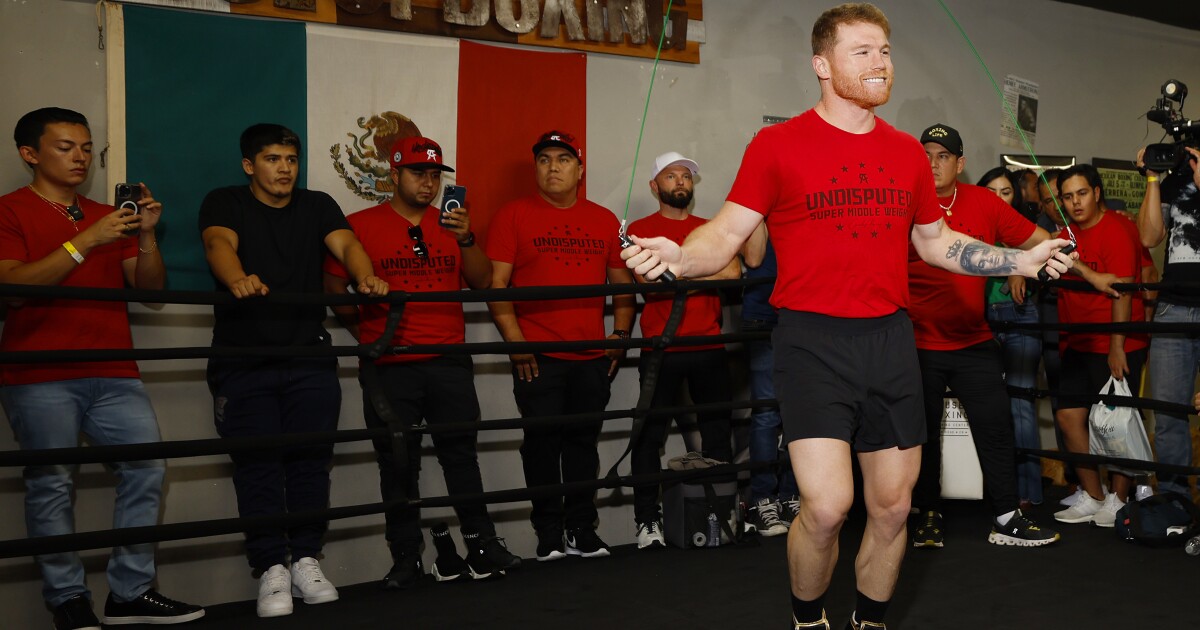 Coming out of defeat is not something Canelo Alvarez has had to deal with much in his most spectacular boxing career.

The 32-year-old, a native of Guadalajara, Mexico, who has lived and trained in San Diego for the past few years, is 57-2-2 with 39 knockouts. He won multiple world titles in four weight classes, was long considered one of the best pound-for-pound boxers on the planet, and ranked eighth on Forbes magazine’s list of highest-paid athletes.

And yet, the man affectionately known as “Saul” by his most ardent fans is coming off a stunning 12-round unanimous decision loss to then-relatively unknown Dmitry Bivol on May 7 in a light heavyweight (175-pound) bout. ) in which he entered as a 5-1 favorite.

Alvarez’s only previous loss came to Floyd Mayweather Jr. in a light middleweight (154-pound) bout in 2013.

The way Canelo lost to Bivol – he looked slow, could rarely land the timely counter-punches that have long been a trademark, and could never find a way to hurt the naturally taller opponent – raised some interesting questions.

Could his early years be behind him? Did he spend too much time on the golf course and not enough in practice?

And most importantly: what will he have for a highly anticipated third fight against Gennady Golovkin, with Alvarez’s four super middleweight belts (168 pounds) on the line, Sept. 17 in Las Vegas?

Alvarez struck a balanced but also defiant tone Monday during a media session ahead of a public workout at the House of Boxing in Paradise Hills.

“I’m at my peak, I’m a champion and I’ll show it in this fight,” Alvarez said. “My last fight will have no impact on this one. He’s a very different opponent. He knows me. I know him. It will be a great fight. »

The first meeting with Golovkin took place in September 2017 and resulted in a controversial draw, with many observers believing Golovkin deserved the decision.

Alvarez won a close decision a year later in a fight that many have dubbed 2018’s “fight of the year.”

Golovkin (42-1-1, 37 KOs) holds the WBA and IBF titles at 160 pounds and is coming off a knockout victory over Ryota Murata in April. But he appears to have lost hand and foot speed and some of the power that saw him knock out 23 consecutive opponents between 2009 and 2016.

He’s also 40 and putting on weight for a fight that will take place in front of a decidedly pro-Alvarez Vegas crowd.

Alvarez is listed as a favorite, but the closeness of the first two fights combined with the way Alvarez looked in this loss to Bivol makes for a potentially fascinating matchup.

If Alvarez wins, he said he would be open to a rematch with Bivol as long as Bivol defends his title against Gilberto Ramirez on November 5.

The idea of ​​facing Bivol again at a higher weight doesn’t seem to bother Alvarez any more than the prospect of risking his four belts against Golovkin.

“I’m in a position where I don’t have to take risks, but I still think the best fighters have to take risks,” Alvarez said. “Fans want to see great fights. I just went up (in weight) by risk against (Bivol) and I don’t care because I want the competition. That’s what champions should do.

Carter is a freelance writer.