The New Waterford product was 12 years old and was convinced by his friends and family to give the sport of boxing a chance, knowing it would be an opportunity for him to learn discipline and self-defense.

“At first I didn’t really take it seriously,” LeBlanc said. “I knew I wanted to learn how to protect myself and not hurt myself, but I also thought it was a good way to stay fit, so I gave it a try.”

It didn’t take long before LeBlanc discovered his passion for the sport. After a few months of training, he was approached with the opportunity to step into the ring for the first fight of his career.

At first, LeBlanc wasn’t sure the time was right. However, after watching teammates and brothers Matthew and Josh Ross practice during practice, he knew he wanted a taste of action as soon as possible.

“I fought a good guy by the name of Brayden Paul from Red Tribe Boxing Club and I actually won the fight,” said LeBlanc, now 17. “I was asked if I wanted to try a fight right away and I told them yes and luckily for me it went well.” 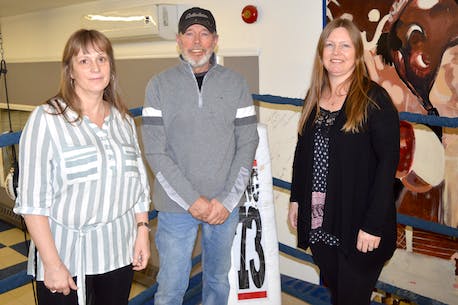 The victory did not come by chance. In fact, LeBlanc won his first seven fights to start his career, which gave him the confidence and motivation to face stronger opponents in the future.

“Once I got in the ring and realized I was in front of everyone, I seemed to really enjoy it and thrive on the attention,” LeBlanc said. “Things took off from there and since then boxing has been a huge part of my life and continues to be so today.”

As the opponents got stronger, LeBlanc continued to progress as a fighter and learned a few lessons along the way.

“I was doing too well against the competition I was facing, so they wanted me to have a little more challenge,” LeBlanc said. “I lost a few fights and I think that really taught me how to lose. I didn’t take losses the wrong way and I was a good sport winning and losing and that’s how it is. what to be.

No matter the results, LeBlanc always had compassion for his opponent. In fact, he has always tried to help other boxers with their skills outside the ring when the fight is over.

“After the fights, I would give them advice if I knew any to help them improve as well,” LeBlanc said. “We all strive to be the best we can be, and we try to learn from each other and that still happens today.”

As LeBlanc continued to train and continue to have success, coaches and trainers around him began talking to him about the possibilities of where the sport could take him.

“Everyone told me boxing could take you further than any other sport, but I never believed them,” LeBlanc said. “Once we started taking trips to different parts of the country, I started to realize that they weren’t lying, and I could really go a long way in my career if I put in the work.”

It was during this time that LeBlanc focused solely on boxing, spending more time in the gym and training harder than in previous years.

LeBlanc began competing in provincial championships. Last December, he won his provincial bout by defeating Brayden Collins in an event at Sydney’s Center 200.

Meanwhile, LeBlanc was working with Boxing Nova Scotia’s top point guard, Brad Ross, and training with the provincial team for the Canada Games in Halifax.

LeBlanc’s talents were quickly noticed by Ross who, before moving to the Halifax area, managed the Sydney Boxing Club for 15 years.

“Over the past two and a half years, Brayden has really come a long way and he’s improved a lot,” Ross said. “He gives 100% every time he trains in the gym and during training camps and he brings every competition I’ve ever seen him.

“He fights every time he gets in the ring and I think he really has all the tools and all the potential to really excel in the sport.”

LeBlanc traveled to La Belle Province and was accompanied by Ross, who worked as a coach during training camp. He was one of 20 fighters at the event.

Although he was the only boxer from Cape Breton in camp, he was joined by fellow Nova Scotians Zion Ash and Sierra Eshouzadeh, who were also trying out for the team in the men’s and women’s categories, respectively.

LeBlanc admits training camp was an experience he will never forget, noting that part of the event focused on the technical side of the sport.

“It was tough, but it wasn’t exhausting,” LeBlanc said. “They made us do drills and we learned different fighting styles and little tricks to help us out, so that was really beneficial.”

The camp also included tests of strength, speed, endurance, muscle memory and reaction time in an effort to learn more about the fighters.

LeBlanc returned to Cape Breton and felt confident in his chances of making the team. He knew he took camp seriously and felt he was doing enough to impress the coaches.

“There was a little trepidation, but I knew I had done everything I could, and I was proud of myself for that,” said LeBlanc, a Grade 12 student in the trades program at Sydney Mines Memorial High School.

“It was the wait to find out if I made the team that was the hardest part of the process when I got home.”

Last week, LeBlanc received the news he’s been waiting for – he had made the national youth team in the 71kg division, 156lb class – and will represent the country at several events during the 2022-23 season. .

Ross wasn’t at all surprised that LeBlanc earned a spot on the team.

“I pretty much expected him to be there,” Ross said. “He’s been on the radar for several months due to some of the competitions he’s had. I knew he would be in the top three of his weight class, but he ended up being No. 1.”

When you think of boxing in New Waterford, several fighters come to mind including champions Les Gillis and Archie (Bear) Hannigan as well as Nemis’ fighters to name a few.

LeBlanc said looking back at boxers who have come before him, he is proud to represent not only Cape Breton but also New Waterford on the international boxing stage.

“I also wanted my name to be known for boxing in New Waterford,” LeBlanc said. “Everyone knows these guys and what they’ve done for the sport and our community and following in their footsteps is such an honour.”

Along with LeBlanc, Ash and Eshouzadeh also made it to the national team, marking the first time since 2015-16 that Nova Scotia has had three fighters on the youth team.

The team will start the season by traveling to Eger, Hungary in June for the Bornemissza Youth and Junior Memorial Tournament.

Meanwhile, LeBlanc will travel next month to Alberta for the Calgary Cup with the provincial Canada Games team, before joining the national team due to his busy schedule.

The national team will also travel to Germany in July and take part in the Junior World Championship in Spain in November.

LeBlanc credits past and current coaches for helping him reach this stage in his career.

“There were a few people and coaches who really helped me reach my potential,” LeBlanc said. “Emerson Rose was one of them who helped me and of course my current coach Shawn Clements has been amazing and so many others – I can’t thank everyone enough.”