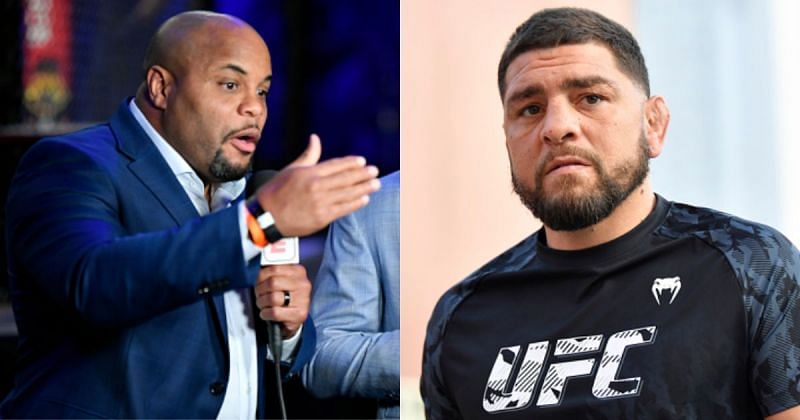 Daniel Cormier has suggested he would like to see Nick Diaz in fights against Niko Price, Donald ‘Cowboy’ Cerrone and Mike Perry. ‘DC’ has indicated that these three fighters and others like them would be ideal stylistic clashes for Diaz.

“To me it’s guys like that: Niko Price, ‘Cowboy’ Cerrone, Mike Perry. This kind of guy, for me, I log in to watch Nick (Diaz) fight every time.

The fight was originally scheduled to take place at welterweight. However, just days before the event, Nick Diaz’s camp requested that the fight be changed to a middleweight fight.

Many believe Nick Diaz was injured before the fight, which kept him from making the move to welterweight. The Stockton native lost via TKO after choosing not to continue fighting after a third round knockdown.

Their first fight saw Nick Diaz defeat Robbie Lawler via TKO in the second round at UFC 47 in April 2004. They are currently 1-1 in their streak.

Over the years, Nick Diaz has received a lot of praise from the MMA community for his friendly fighting style. However, given that he has slowed down with age, it is unrealistic to expect the same level of production from the Stockton native. Perhaps that’s why Cormier thinks Diaz should fight someone like Cerrone, who is also a brawler in the later days of his career.

Niko Price’s most recent fight was a unanimous decision loss to Michel Pereira at UFC 264 in July. Donald ‘Cowboy’ Cerrone’s last fight was a first round TKO loss to Alex Morono at UFC on ESPN: Rodriguez vs. Waterson in May.

Mike Perry’s latest outing saw him lose by unanimous decision to Daniel Rodriguez in UFC on ABC: Vettori vs. Holland in April. At this time, neither Nick Diaz nor the UFC have made any announcements regarding Diaz’s next fight or opponent.

Mark Hunt’s lawsuit against the UFC could be a big win for fighters – find out more here!