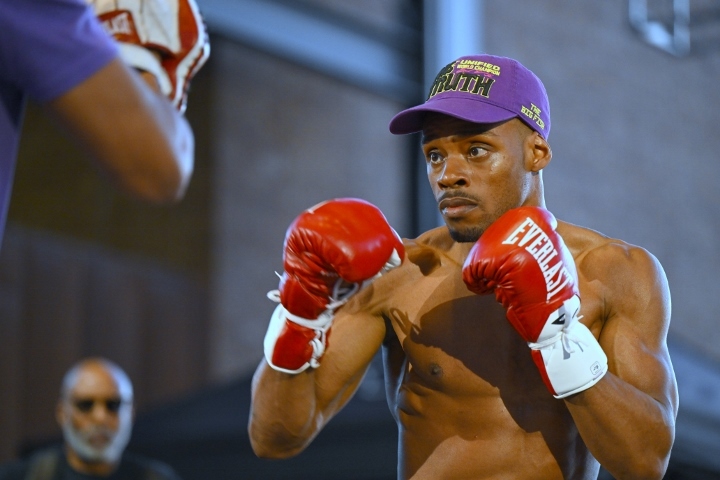 Derrick James, the head trainer of unified WBC and IBF champion Errol “The Truth” Spence, believes his boxer can fight at weights as high as the 160-pound middleweight limit.

Spence will collide with WBA champion Yordenis Ugas in a three-belt unification this Saturday, April 16 from AT&T Stadium in Arlington, Texas, to headline a Premier Boxing Champions event.

A victory will put Spence in position to become the undisputed champion – if he decides to face WBO champion Terence Crawford next.

Another possibility is to move up to the junior middleweight limit of 154 pounds.

“We can go up to whatever weight he wants. We regularly spare heavy goods vehicles. Errol is very physical as a fighter and he can fight up to 160, and maybe even more. I’m not saying that’s what we’re going to do. He would probably be comfortable with that because we’re comfortable being there with bigger guys all the time,” James said.

Before a move to 154 can be explored, Spence must overcome the task of beating Ugas, who is guided into the corner by veteran coach Ismael Salas.

James studied a decent amount of footage to pick up on Ugas’ flaws.

“The Ugas coach looks for the same things I look for in the movies. Salas is smart. He’s supposed to look for patterns and see what kind of punches opponents are throwing. That’s what trainers are supposed to do. I’ll watch some of his fights; I watch enough. Just to understand the patterns and the punches he throws and how he throws his punches so I can emulate them. And I’ll let Errol know this happens, or it happens.” , said James.

“Ugas’ biggest threat in this fight is what you can’t see. It’s his heart and his grit. It’s his desire to want to be big.”