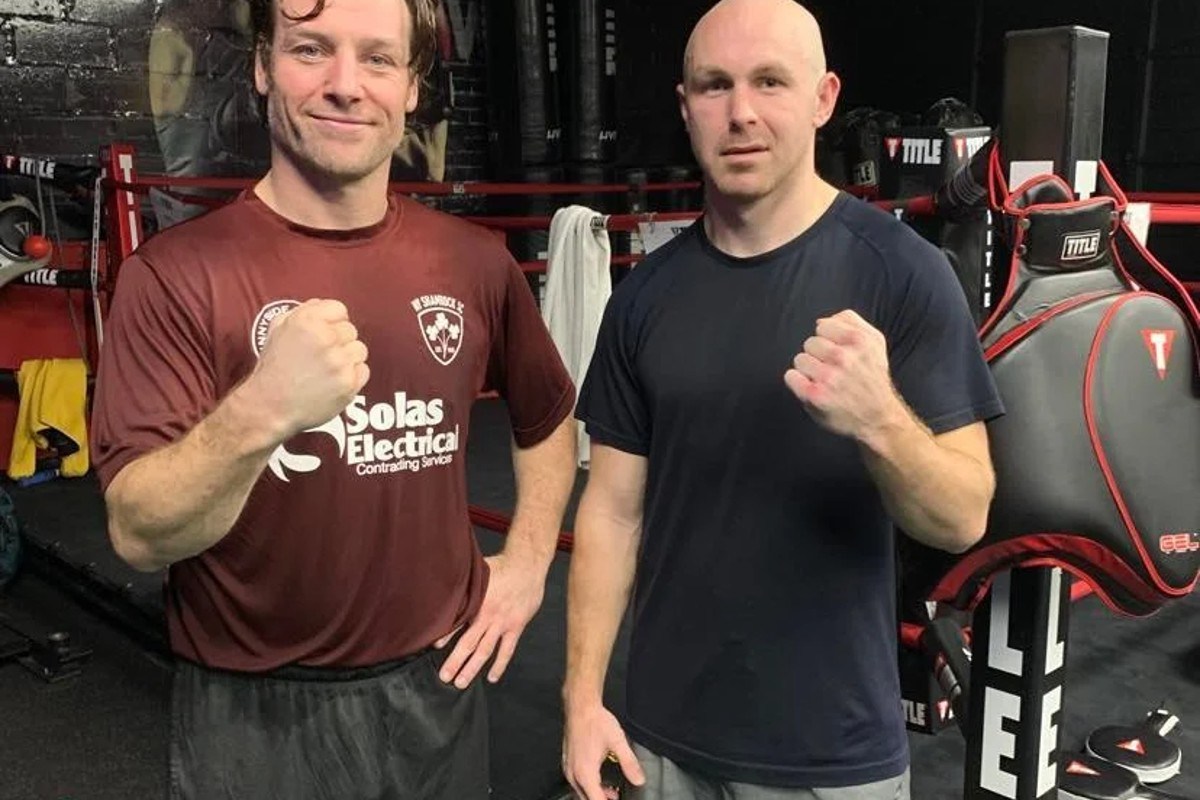 DONAL WARD, as always, started the season with optimism.

This would be the year Roscommon dethrones Mayo from Connacht and shows his true potential in the All-Ireland series.

After all, many of the squad had peaked on the last day across Ireland – when the Rossies won the Minor Championship in 2006.

Ward missed that one, boxing again, but he was the Under-21 Player of the Year in 2009 and by 2015 he had been a senior regular for four years.

Mayo had won every Connacht since, but what about? Roscommon believed.

They beat London in the opener, with Ward starting in the back.

He had been used to his other sporting love interfering with Gaelic football by this point, generally being able to handle both, to some extent.

But this time it was different.

This time his professional life had pulled him out of his dream.

Warden in Cloverhill prison, Ward was injured in stopping a fight between two inmates.

Eventually it changed the course of her life.

Ward joined News Ireland’s The Rocky Road podcast this week where he recalled, â€œIt was probably the worst time.

â€œIt was in the middle of the football championship. We had just been in London to play them two weeks ago.

â€œThere were two boys fighting. Obviously, you can’t let them keep fighting, so you have to intervene.

â€œI damaged my shoulder a bit. I didn’t think about it.

COVERAGE HAS BEEN TOO HIGH

â€œThen when everything calmed down and we were doing our papers or whatever, the shoulder didn’t feel right, so I went to the hospital for an x-ray.

Luckily there was nothing serious, but it just blew up. It was all over the media.

â€œIt was Sunday morning, I didn’t train with Roscommon on Tuesday, I trained the following Thursday, ten days before playing Sligo in a championship game.

â€œBut no, I wasn’t. . . the injury was not as serious as the media made it appear. The fallout was not really pleasant.

Roscommon lost to Sligo, who was beaten by Mayo in the final. Their fifth Nestor Cup in a row.

The defender didn’t play – and also missed the next two games, a qualifying win over Cavan before a loss to Fermanagh.

And that was indeed the case with the county. Thank you for everything.

Ward was a four-time All-Ireland boxing champion. He won the Connacht title ‘most years’.

But football was not to be and ultimately the Cloverhill incident caused him to quit his job and the country as well.

He said: â€œThere was a lot of commotion. You pull and drag a bit.

â€œI hurt my shoulder a bit, but obviously I wasn’t sure if someone had done it or if I had done it myself.

â€œIn the heat of the moment, it’s hard to understand. It’s not an easy job.

â€œPeople think, ‘Oh yeah, it’s handy, it’s awesome,’ but there’s a lot to deal with. I ended up quitting work.

â€œIt wasn’t good for you mentally. For me anyway, I thought I was not ready for this. It was probably a better decision for me to leave.

â€œThere’s a pension and different things. It wasn’t for me anyway.

â€œIt was difficult because I was based in Dublin and going to practice.

â€œYou are up all day at work and sitting in a car going down, recovering from an injury and not fully resting and sleeping completely.

â€œIt’s hard work because it’s 12 hour shifts and you have to try to make your way out of work and rush down the road to Roscommon.

â€œI did it for three years like this and something had to give.

â€œIn 2015 I actually joined Kilmacud Crokes in Dublin for a year and it relieved the pressure a bit once Roscommon was done.

â€œI enjoyed it because I wasn’t racing on the road for club football.

Ward played club football for Western Gaels but he boxed for Loughglynn. It was a family affair.

He said: â€œI have always been involved in boxing.

â€œMy dad and grandfather would have been the coaches at local Roscommon club Loughglynn so I’ve been there for as long as I can remember.

â€œI started competing at 11 like all young boys, but I should have trained and done spars and show pieces at seven, eight and nine.

“It’s been in the family since day one.

â€œI really enjoyed the competitive side. I played a lot of team sports on the way up, but I enjoyed the individual side.

He was successful enough to win titles â€œat the Boy, Youth, Junior and Intermediate levelâ€, adding, â€œThey all have a little different names now!

But when the Gaels were doing well, he chose the camaraderie of team sports over the solo pursuit.

Five of them were part of Fergal O’Donnell’s panel around 2009.

It was convincing enough that he mainly focused on football.

Mayo, however, was still on the way.

They beat the Rossies 4-14 to 2-15 in a 2009 Under-21 Connacht semi-final thriller and Ward saw the potential of Aidan O’Shea, Lee Keegan, Kevin McLoughlin, Tom up close. Parsons, Jason Doherty and Donal Vaughan.

With Ward as the senior starting, they met in the 2011 Connacht final when a teenager Cillian O’Connor threw eight free kicks as Mayo won 0-13 to 0-11 on a nasty day at Dr Hyde Park.

COULD SEE THEIR CLASS

Ward said, â€œThey would all have been in my age group. I think it was Cillian O’Connor’s first year.

â€œHe was in free play that day and he couldn’t miss.

â€œYou have to hand it over to these boys, the dedication and commitment they’ve put in over the last few years, they haven’t had a chance not to win an All-Ireland.

â€œThere’s a reason they’re still on top. They have done a tremendous job.

RETURN ON THE RING

His return to action was instant success, winning gold at the World Police and Fire Games in Belfast.

John Evans was Roscommon’s manager at the time and Ward didn’t mind having both, a black eye or a swollen nose just a sign he was working away from the training ground.

Ward entered the elite national championships at 81kg in 2014 – the domain of fellow Ward, Joe – but in a three-way division he lost the semi-final to Matthew Tinker and returned to focus on football.

Then came the prison incident the following year, which caused him to reassess his life.

His partner Katie is the daughter of Roscommon’s parents who grew up in New York.

Having lived together in Dublin, they traveled during the summer and, after the West Gaels were knocked out of the Club Championship, Ward returned full time.

Soon he made the county for the second time.

Ward said, â€œKatie’s dad owns a bar here, Sissy McGinty in Astoria, so I said it wouldn’t hurt to learn what to do.

â€œI had no idea the difference between vodka and gin, I started from the bottom. And I’m still there!

â€œWhen I arrived in 2017, I played with Kerry here. Because I intended to stay, New York invited me for training in November.

â€œThere was a bit of a hype because we had a lot of top guys.

“No offense to Leitrim, but it wasn’t Galway or Mayo or Roscommon who were coming. There were expectations there.”

Tom Cunniffe de Mayo was in the gang. Vinny Cadden from Sligo, another Rossie in Neil Collins.

But when Jamie Clarke from Armagh joined the setup, people started supporting New York City to beat visitors Leitrim in the 2018 SFC Connacht.

Ward said: “When Jamie came around everyone thought, ‘That’s it, if we’re going to do it someday, this is the year.’

â€œThe way the game went couldn’t be much closer.

â€œWe brought it down and got a couple of points in overtime. The crowd was amazing that day.

â€œIt was bananas. I remember the last kick of the game, we couldn’t stop them, they shot us from the back line, straddled us and blew him up.

â€œJustin O’Halloran was a manager, it was his last year so he put everything in place.

“With Jamie and the other top boys here, everyone agreed.”

A reunion with Tinker – who had moved to New York and qualified for the Golden Gloves final – inspired him to return to the ring.

Ward qualified for the Gloves himself in 2019, fighting at Madison Square Garden where he was replaced by Famous Wilson in the middleweight decider – previously won by “Sugar” Ray Robinson, arguably the tallest. fighter of all.

He added, â€œThe boxing scene here is huge. So much history and so many professionals.

â€œAfter football in 2018 I wanted to take a break. I hadn’t stopped.

â€œI moved to October and the gloves started in February so I trained in the winter and was happy to do it.

â€œA friend of mine works at The Garden and made a bulk reservation for us, so we started selling tickets at the bar.

â€œMy poor partner Katie was under pressure that week!

â€œWe had everyone seated together – 200 people from the bar and probably 200 other people from GAA circles.

â€œThey also had the best time of their lives. They often call me: “When are we coming home?”

â€œThe atmosphere was great, it was a tough fight and I thought I had done enough.

â€œThe first round I started too slow, the second I really thought I had won it, and the third round – it turned into a wrestling match and the referee lost control of it.

â€œLook, it was a close fight and it could have gone one way or the other. Fighting there was amazing.

I HOPE TO RETURN

The plan is to go back there as a pro boxer.

Ward plans to debut in January or February and has Irish boxing royalty in his corner, with John Duddy and James Moore involved.

The football is parked again, for now. But never say never.

He recently played with the Longford club and due to the pandemic they have to play older guys just to make a 15.

At 33, Ward wants to get into boxing and knows the time is right.

He has a three month old baby girl and fights to make her proud, adding, â€œIt’s an amazing time.

â€œThings are very hectic at the moment.

“But I hope for a busy 2022 and the dream would be to return to The Garden at some point.”