An expected revenge for a crown, along with important champions and names on the rise, make up the last night of the year, led by Argentina Boxing Promotions by TyC Sports. The Argentinean light fly champion, the former Buenos Aires World Cup challenger AyelÃ©n â€œPiruâ€ Granadino, will face the also Buenos Aires World Cup challenger DÃ©bora â€œPolvoritaâ€ GÃ³mez, in dispute for the South American flyweight title, which is vacant, in a direct rematch, in combat stellar of the evening that will take place this Wednesday, December 22, at the Tierras Altas – Tortuguitas Sports Center, in Tortuguitas, province of Buenos Aires, Argentina, in a new production of Argentina Boxing Promotions, by Mario Margossian, which will be broadcast live Through TyC Sports starting at 21, for Argentina and all of America in its First Boxing cycle.

In the semi-star fight of the night, the world champion fly of the World Boxing Organization (WBO), the undefeated Buenos Aires AnahÃ­ â€œLa Indiecitaâ€ LÃ³pez, will face the Tucuman Natalia â€œEl HuracÃ¡nâ€ Alderete, in the bantamweight category and six rounds, in a rematch.

The central fight will be a direct rematch, of an exciting fight. Both matched in an intense ruling divided by this same crown on October 23 in Cutral CÃ³, NeuquÃ©n. Now, Granadino (6-1-4), who disputed the WBO flyweight world title, and had previously defended his national mini flyweight title on September 4 against JazmÃ­n Villarino, will go for his second crown. Opposite will be GÃ³mez (7-6-2), super flyweight world challenger of the International Boxing Federation (FIB) and current No. 2 of the Argentina fly ranking, who before the duel with Granadino had played eight rounds against AnahÃ­ LÃ³pez, and will play for the third time this belt.

At 23, Granadino has established herself as a solid boxer. Winner of the undefeated Tamara Demarco and AnyelÃ©n Espinosa, on September 7, 2019, she defeated Demarco in the rematch in a majority ruling and won the Argentina title. After falling to the unbeaten AnahÃ­ LÃ³pez for the WBO flyweight world title, she defeated Sol Baumstarh before defending her national title against Villarino in a draw that most had as a wide winner, prior to her first duel with GÃ³mez.

Now he will once again deal with the fierce Gomez, who yearns for a title. Three years older, she has measured many of the best in the country and the region. After surpassing practically every rival at the beginning of her career, she was defeated only by champions. Three times its winner was AnahÃ­ LÃ³pez -the second contesting the Argentine and South American fly titles-, once Evelin BermÃºdez, the Chilean Daniela Asenjo, and she had her World Cup opportunity when she fell against Micaela LujÃ¡n in a decision divided by the IBF super flyweight crown. In addition, he defeated Baumstarh and Carla Merino, prior to his third setback with LÃ³pez. Therefore, it comes with a thirst for revenge.

In the semi-star combat of the night, the WBO flyweight world champion, the undefeated Buenos Aires AnahÃ­ â€œLa Indiecitaâ€ LÃ³pez (19-0-1, 1 KO), will face the Tucuman Natalia â€œEl HuracÃ¡nâ€ Alderete (4- 5, 1 KO), in the bantamweight category and six rounds, in a rematch.

They already know each other. On October 25, 2019, LÃ³pez prevailed unanimously after six rounds in Buenos Aires. After that presentation, â€œLa Indiecitaâ€ dominated the Venezuelan Niorkis CarreÃ±o in a wide unanimous ruling and won her WBO flyweight world title on December 20, 2019, which she retained over Granadino, defeated DÃ©bora GÃ³mez for the third time, and arrives on the 8th of Julio broadly beat LucÃ­a Ruiz in a unanimous decision.

Opposite will be Alderete again, N Â° 4 of the Argentina super flyweight ranking, who knows how to face champions. After three victories, she gave up her undefeated record against AnyelÃ©n Espinosa, and after that she only fell against monarchs. This is how he fought Evelin BermÃºdez, AnahÃ­ LÃ³pez, Marcela AcuÃ±a and Florencia JuÃ¡rez -for the South American title-, taking them all to the cards. However, on November 19, she surpassed Mexican Estrella Valverde in technical decision and is ready for her revenge. 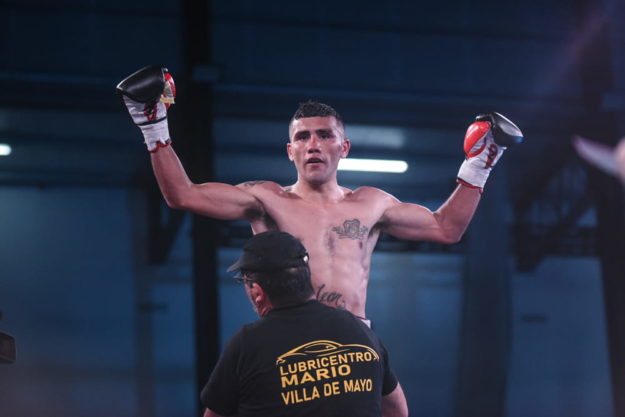 CHAMPIONS IN THE REST OF THE NIGHT

Beyond the star duels, a schedule with current or reigning champions completes the night. In the main complementary fight, the South American bantamweight champion and Argentine super bantamweight, the local Pablo GÃ³mez (14-10-2, 1 KO) – in the photo -, will face the former Latin champion from Buenos Aires Carlos â€œTortitaâ€ FarÃ­as (14-19 -4, 1 KO) in the super bantamweight category, six rounds, in revenge.