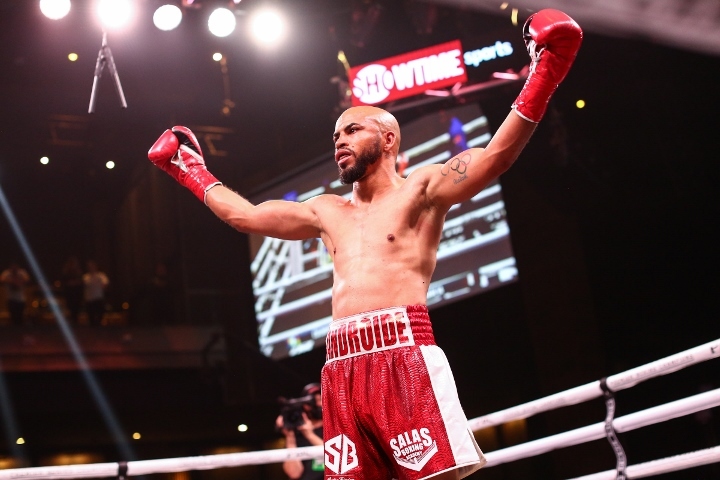 On August 20, Roger Gutierrez (26-3-1) will defend his WBA world super featherweight title against Hector Luis Garcia (15-0) at the Seminole Hard Hotel and Casino in Hollywood, Florida. The fight will be part of a Premier Boxing Champions telecast on Showtime which is headlined by the return of Adrien Broner against former champion Omar Figueroa.

Before the fight was officially announced, there were rumors that the fight would take place in Gutierrez’s homeland of Venezuela.

Garcia told BoxingScene.com there was never an offer on the table to go to Gutierrez’s backyard and he didn’t care where his fights were.

“The fact that the fight will not take place in Venezuela should not be an excuse. Where a fight occurs and such details are beyond my control. I am a boxer and as a boxer my responsibilities are to prepare myself physically and mentally to face any fighter at any location. If you look at my record in my amateur career, I’ve beaten several international fighters in their own backyard, so why can’t I do that with Roger Gutierrez? Garcia said.

Garcia put himself in a position to fight for a world title when he upset heavy favorite Chris Colbert in Las Vegas in February. Colbert entered the fight as high as a 50-1 underdog in some sportsbooks. He dropped Colbert once in the fight on his way to a dominant unanimous decision win.

After defeating the flashy Colbert, Garcia is very confident ahead of his showdown with Gutierrez. Although he respects his opponent, he sees nothing special and expects to put on a master class performance.

“I think Gutierrez has a style that a lot of other fighters have and there’s nothing that sticks out. However, he is a champion for a reason and like all boxers he deserves his respect,” Garcia told BoxingScene.com.