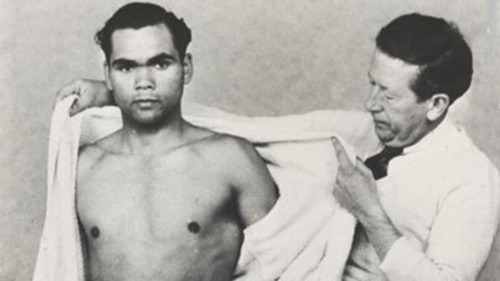 Dave Sands’ family granted the ABC permission to use photographs of him. Aboriginal and Torres Strait Islander readers are advised that this article also contains images and names of other deceased people.

Aboriginal boxer Dave Sands was brought up at Burnt Bridge Mission on the NSW north coast and, from humble beginnings, became an Australian boxing legend, achieving remarkable success in the 1940s and 50s.

Her family are working hard to keep her story alive and now, decades later, say a “wrong has been righted”.

A Dunghutti man, born Dave Ritchie, Sands comes from one of Australia’s greatest sporting families. His brothers, Clem, Percy, George, Alfie and Russell were also all successful boxers known as “The Fighting Sands”.

Sands became a rising star and went from success to success before his tragic death in a car accident in Dungog in 1952 at the age of 26.

He held three national titles at once, in the middle, light and heavyweight divisions, as well as the Australasian light heavyweight title.

At this time champions were usually given their own belt to keep, but after winning the British Championship Sands was not given one – the exact reason is unclear.

Now, 73 years later, he has finally received full recognition for his achievement.

The sash was recently presented to his relatives in NSW parliament, including his nephew Phillip Dotti and grandson Chad Ritchie.

“Having this belt and this recognition really cements my grandfather’s place in boxing history,” Mr. Ritchie said.

“It also gives a platform for young Indigenous boxers to really look at something they can accomplish.”

Mr Ritchie said his grandfather’s achievements also inspired him throughout his life.

“I mean, times were tough back then, and being a young native boy coming out of the Burnt Bridge mission, being able to travel the world…was something unheard of at the time,” he said. declared.

“Growing up, I heard stories from the family about how great my grandfather was, not just as a boxer but as a person, as a family man.

“It gives me the belief that, not just in sport but in life itself, if you put your mind to it, you can achieve anything… and that’s something I’ve always been proud of.

“I have always considered him one of my heroes.”

The presentation of the replica belt came after a long quest by Mr. Dotti to set the record straight.

“Sands was the first aboriginal [person] go overseas and win a boxing title and come back with that title. But [he] never received full recognition for such an achievement,” Mr. Dotti said.

“So it was time to right the wrong…and now we have.”

“He was ranked number one for Sugar Ray Robinson’s world middleweight title then,” Mr Ritchie said.

“And Sugar Ray Robinson is considered the number one boxer of all time, so being number one behind him at 26 is something not many will realize.”

The boxing legend will be honored in his hometown

Sands was inducted into the International Boxing Hall of Fame in 1998, and his family wants to keep the memory of his accomplishments in Australia alive.

Mr Dotti said he hoped to hold a display at some point of Sands’ replica belt and other boxing memorabilia in his home town of Kempsey.

“These guys to me were, and still are, Australia’s biggest sporting family, and at a time when you had to fight for acceptance in what you were doing, these guys were bigger than that,” he said. -he declares.

The Kempsey Shire Council is also working with the family to create “ongoing and appropriate local commemoration” for Sands and his fellow champions, and is considering a bust or statue.

“Dave and the Ritchie family put our county in the spotlight of the world in the 1940s and 50s and now is the time to act to honor them,” said Kempsey Shire Mayor Leo Hauville.

“We’re talking about an aboriginal family in the 1940s when times were tough,” he said.

“You couldn’t leave the mission without permission…and being able to do what they did is something that no other family has yet achieved,” he said.