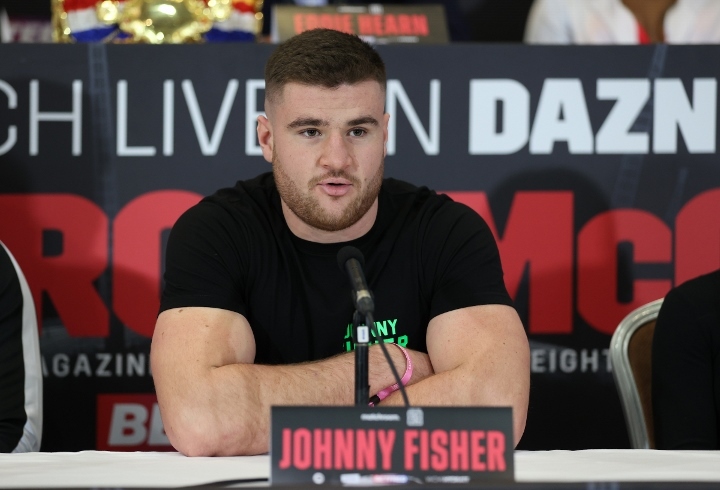 Heavyweight Johnny Fisher went the distance for the first time, as Spaniard Gabriel Ebguema withstood an early onslaught and gave Fisher plenty to ponder on the Alexandra Palace bill in north London.

Fisher was wild with his right at first, but when he came out of a clinch with blood streaming down his face from a cut above his left eye, he started to get urgent, winging his right hand in Enguema, which the Spaniard did well to resist.

The Romford fighter was getting very happy with the right hand in the second round and there were signs that Ebguema was starting to read it, as he repeatedly slipped the big right and landed well with an uppercut from close range. But Fisher finished the round well, having landed a good left hook and, while he also took the third, there were signs he was running out of ideas.

The fourth was a bit more circumspect and in the fifth, when Fisher’s mouth guard fell off, it became clear his stamina was running out. It was now Ebguema who advanced, although in the final round the Spaniard’s production was minimal, allowing Fisher to take a comfortable decision to move up to 5-0, with referee Mark Bates scoring 59-55.

Ellie Scotney recorded the best win of her career in her fourth pro fight as she faced a cut from the third round before claiming a unanimous decision against former IBF super flyweight champion Jorgelina Guanini, from Argentina.

It was a difficult meeting, the two heads clashing regularly. Scotney had the slightly cleaner job and looked good boxing on the back foot, but was hit with a run in the last round for being held down by referee Steve Gray.

The three judges, Mike Fitzgerald, Jean-Robert Laine and Marcus McDonnell all opted for Scotney, by scores of 95-94, 96-94 and 96-94 respectively.

Ron Lewis is an editor for BoxingScene. He was a boxing correspondent for The Times, where he worked from 2001 to 2019 – covering four Olympics and numerous world title fights around the world. He has written about boxing for a wide variety of publications around the world since the 1980s.