Manchester woke up to a new world champion on Saturday after Jimmy Kilrain Kelly’s stunning win over unbeaten Kanat Islam in Florida.

Kelly will bring the WBO World Middleweight Championship back to Wythenshawe with him after upsetting the odds of beating Islam via a majority decision in Plant City.

Scores of 96-94, 97-93 and 95-95 saw the 29-year-old prevail at the Whitesands Event Center and signal the biggest win of the Manchester fighter’s career.

the Manchester Evening News spoke to Kelly after his memorable victory in the United States to find out more about the new world champion from Manchester.

Kelly was always destined to become a boxer. He followed in the footsteps of his father, Jimmy Snr, who had been on the amateur scene with over 100 fights under his belt, and his grandfather, another amateur boxer.

It was this boxing heritage that earned him his middle name, having been named after bare-knuckle fighter Jake Kilrain, who made a name for himself in the late 1880s as a boxer.

Kelly followed his father to Jimmy Egan’s gymnasium in Wythenshawe and took his first steps in the amateur ranks, winning three ABA junior titles and two schoolboy titles before turning professional at 19.

“I got into boxing through my dad, he boxed with Jimmy Egan. It’s been a decade next week since I turned pro,” Kelly said.

“When I was an amateur, my dad, Jimmy Egan, Steve Egan all helped me along the way. When I turned pro, it was people like Maurice Core.

“I had a lot of support, a lot of good people who helped me throughout my career. For this fight, I had Arnie Farnell, and I had a perfect training camp.

It was at Jimmy Egan’s gym that Kelly would meet future world heavyweight champion Tyson Fury, with the two Wythenshawe lads training together regularly.

“I used to box with Tyson when he was at Jimmy Egan, I used to train alongside him there. I believe I have a video of me training with him when I I was 15, and he was much taller than me!

“He inspires me to do well. I remember when we were young and he told me he was going to be world champion, and he fully believed in it back then. 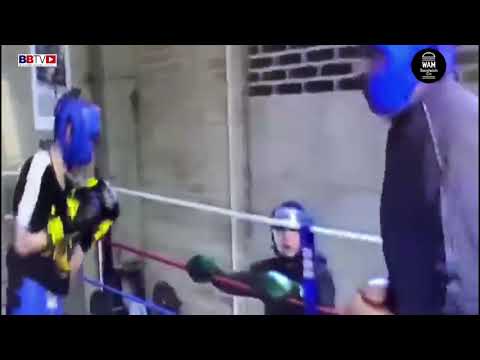 Turning professional, Kelly made an impressive start to his career, going 16-0 and winning various belts along the way.

After winning the WBO Inter-Continental Super Welterweight title with a unanimous decision over Martin Fidel Rios in 2015, his first world title came against Liam Smith later that year.

A classic rivalry between Liverpool and Manchester – Kelly is a Manchester United fan and wore the club’s shirt in preparation in response to Smith wearing a Liverpool shirt – it was the Merseyside fighter who emerged victorious with a TKO in the seventh round at Manchester Arena.

Kelly got back on track with seven straight wins, before suffering the second loss of his career to Dennis Hogan in 2018, the unanimous decision going against him in Australia.

He only took two more fights as he chased another world title fight amid the Covid-19 pandemic, but his chance came as Kanat Islam finally agreed to fight.

“I just stayed patient and knew the opportunity would come,” Kelly said. “Even through all the hardships, I wasn’t going to let anyone beat us, so I’m over the moon.”

Kelly was a heavy underdog heading to Florida. Islam had made short work of many of its previous adversaries over the years.

But he couldn’t find a way past Kelly, the Wythenshawe fighter mixing up his attacks and keeping Islam off balance with his jabs and head rights, before his big moment was confirmed after 10 rounds.

“It feels good. I’m a little sore, but I’m buzzing! I went to America and won.

Asked what the key to his victory was, Kelly replied, “Just patience. I knew he was a dangerous opponent, he was 28-0 with 22 knockouts, a former Olympian, and I was a 1/25 underdog.

“I just knew my experience would come to fruition, and I just stayed patient and stuck to my game plan.”

Kelly now returns home to Manchester knowing there will be plenty of names lining up to try and take his title away from him.

They will all have to wait for now, as he is lucky to be reunited with his family after spending so much time in the United States.

“A comeback fight in Manchester would be nice, but I have to choose the best option financially. I have two children and I want to prepare them for life.