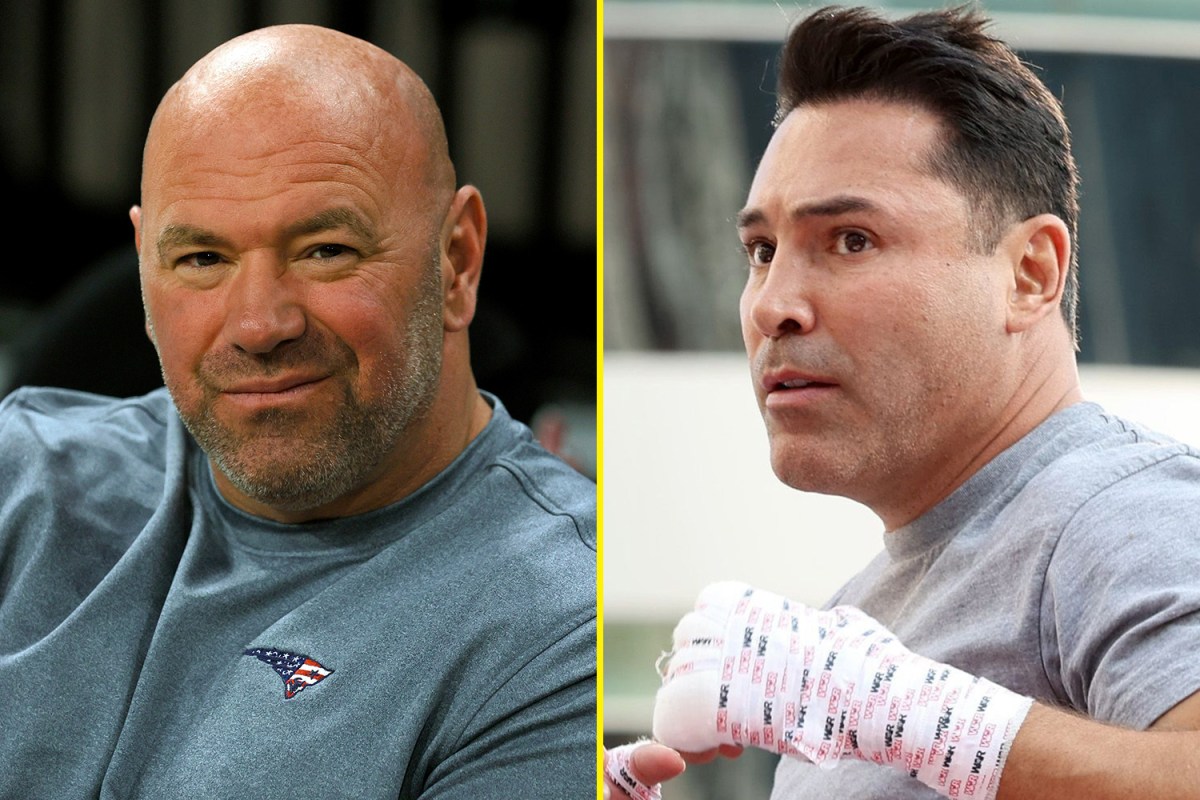 The rivalry between Dana White and Oscar De La Hoya has once again shifted into high gear.

The couple were once friends, but now share an ongoing feud that stems from the UFC president’s fury against the boxing legend for writing a lengthy Facebook post telling fans not to watch Floyd Mayweather vs. Conor McGregor in 2017.

White was of course a key figure in promoting this fight, hence his anger.

White and De La Hoya went back and forth on Instagram last week as De La Hoya responded to White’s claim that he faked COVID to withdraw from his Triller comeback fight with Vitor Belfort, who was scheduled for September 11.

De La Hoya wrote: “Is that all you got, Dana White?” You accuse me of having tampered with a virus that killed nearly 700,000 Americans to avoid a fight?

“You pathetic shit, you never even laced the gloves.” And you completely ignored my original argument about underpaying your fighters. “

White responded quickly and also responded to De La Hoya’s earlier comments about how much UFC featherweight champion Alexander Volkanovski was paid after his performance at the UFC 266 main event on September 25.

“Don’t worry about Volkanovski, you clown,” White wrote. “He has a team of very smart and sophisticated people behind him and he’s clearly doing very well for himself. If he needs to buy an 8 ball, he may contact you for advice.

“It’s no secret that you are a liar, a drug addict and a bastard. It doesn’t matter if you “put on gloves” and there is no doubt that you have accomplished great things in boxing. But outside the ring you’re an absolute fucking loser.

White went on to target De La Hoya’s own attempt to promote an MMA fight in 2018 – Tito Ortiz vs. Chuck Liddell 3.

“When you were a single MMA promoter, you lied about what Chuck [Liddell] and Tito [Ortiz] would and you paid everyone’s ***.

“Not to mention that you didn’t even take the time to learn the names of your fighters on the map. So fuck you.

“Let me promote the fight and do the whole world a favor and fight Vitor Belfort so we can all watch you fall asleep.” “

White faced the press days later for his “Contender” series and, when asked, was ready to jump into the fighters pay and De La Hoya debate.

“Normally you know how this stuff works,” White began. “People like to push buttons and talk about fighter pay and you don’t see us come out and talk about it because I don’t give like ***…

“At the end of the day, my philosophy is this: It’s not everyone’s business what these fighters do.

“None of these guys are subject to some sort of gag order in their contract. Any fighter on the list could come out and tell you what they’re up to.

“The guys at the top of the map make all the money. We organize 52 to 53 shows per year. It’s a business and one of the other things we do is reinvest in sport.

“Not just in the UFC business, but in sports and we’ve built a global business over the past 20 years. We have infrastructure. We have over 450 employees, ”White said.

The UFC big boss went on to detail how the UFC has offices all over the world and training centers on different continents to emphasize his point.

“When you think about it, guys like [Bob] Arum and De La Hoya never had a vision to do something like this and it never was, ”White continued.

“Everyone thinks they know what they’re talking about and everyone has an opinion. Do you know what you know about this business? What I’m fucking telling you.

White then turned his attention squarely to De La Hoya and blurted out his perceived lies.

“Every UFC veteran who was on his card did more in their last [UFC] fight than they did for his event, ”he insisted. “Most of them have done more in many or all of their UFC fights, haven’t they?

“So 17 of the 22 fighters got less than starting compensation in the UFC, the guys who fought on his MMA card.

“Now where I’m coming from is that hole **, every time he opens his mouth he acts like # 1 – like when he throws an event he pays more than us or something of the kind.

“How about this: I have 650 fighters on contract. He had one that mattered. He couldn’t keep it.

“Twelve of the 22 fighters were compensated less than what we pay the children in the Contender series.

“Remember the great tale of when Chuck and Tito [in 2018] going to do more than they ever did? White asked.

“So there is another fucking lie from Oscar De La Hoya.”

White then turned over documents to the media that showed payment records for a boxing card put in place by De La Hoya’s Golden Boy Promotions company on June 9.

“What you were given, I could have brought 30,” White said. “I brought one because it’s June 9, 2021. OK? It was a fight that just happened in June. That’s a Golden Boy Promotions fight that bastard put on, okay?

“Volkanovski got paid more to wear his UFC Venum kit [at UFC 266] that Oscar De La Hoya paid for the entire fight card.

“And there is so much more to De La Hoya,” White continued. “He owes the people who fought for him money that he did not pay.

“The list goes on and on. Imagine if I still had a fighter from a year ago, you would crucify me every day. This guy, nobody cares.

“And the only reason [I’m responding to him], I despise him so much that every time he lies I point it out, and people always don’t give anything away.

“Don’t you like the way we pay our fighters? Too fucking bad, ”White said.

talkSPORT will have an exclusive live radio commentary from Tyson Fury vs. Deontay Wilder 3 from Las Vegas on October 9.