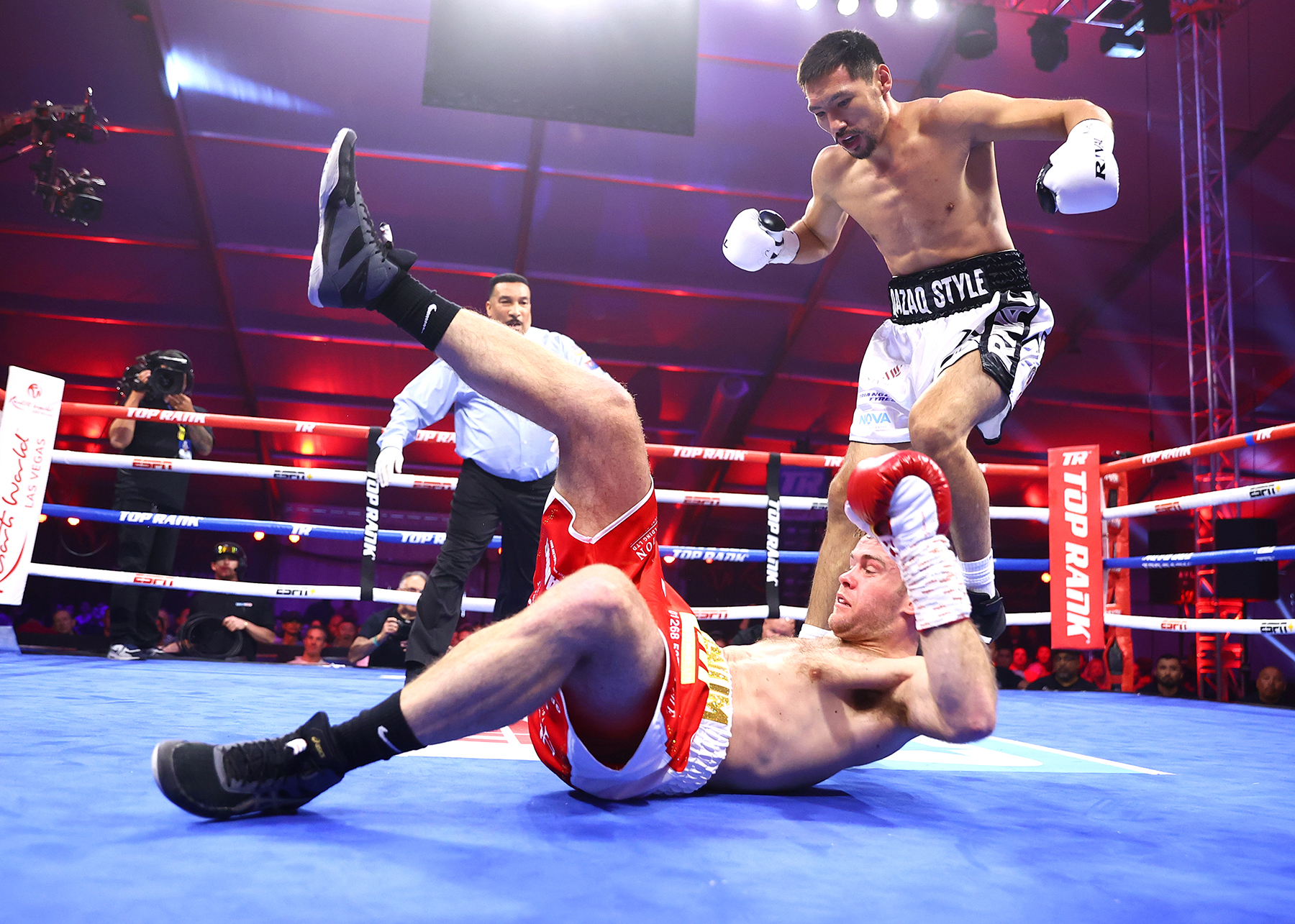 By Cassandra Cousineau of LVSportsBiz.com

In boxing, you can’t put a price tag on a breakthrough moment in the championship. Except Resorts World Las Vegas is betting it can try. Headlining Kazakh southpaw, Janibek Alimkhanuly (11-0, 7 KOs) taking on Danny Dignum (14-0-1, 8 KOs) of Essex, England, the $4.2 billion mega resort anchoring the northern end of the Las Vegas Strip has lent its colossal mark to Las Vegas-based boxing promoter Top Rank Boxing. The WBO interim middleweight title fight ended with a monster left uppercut in front of a spirited crowd inside the Resorts World Event Center.

Earlier this year, property president Scott Sibella said, “As we have grown Resorts World Las Vegas, entertainment has always been an integral part of our business strategy, and as part of that, we have considered hosting major sporting events on our property. We are thrilled to partner with an industry leader like Top Rank to host this event and look forward to welcoming fans to Resorts World Las Vegas’ first ever fight night.

The station hasn’t even been open for a year and it has already hosted its second primetime boxing affair. Billed as a 72,000 square foot outdoor event and entertainment space, the boxing venue hosted ESPN’s ten-card televised event, with tickets starting at $25. Prices ran at a modest $100 on the high end.

Fighters like Janibek can often be avoided until they have more mileage and are less dangerous. Top Rank has a champion with real firepower on their roster. However, founder Bob Arum and his team may need to get a little creative with the pairing, as other belt holders are circling the ring for a while.

The road less traveled is the most familiar path for most boxers. The sport has been a beacon, drawing men and women into incredibly challenging environments. With talent, God given physical gifts, a ton of hard work, a little luck helps. “I think I’m one of the most shunned fighters; many will step down,” Janibek, 29, said at the fight week press conference.

For its second stint inside the Resorts World Event Center, Top Rank presented an evening filled with Olympians like Janibek and other up-and-coming talent. The promotion has signed all 2020 U.S. Olympics men’s boxers to its roster. Several of them, including Duke Regan, Karlos Balderos and Delante “Tiger” Johnson, appeared on Saturday’s card.

The co-feature offered 2012 Olympian Jamel Herring a former WBO junior lightweight world champion. Herring lost a tough 10 rounds to undefeated NABF title holder Jamain Ortiz, Herring, 36, may have been in his last professional boxing competition. The former Marine and fan favorite is known as one of the good guys in the sport. While still in the ring after the fight, he said, “I’m a proud man. I don’t know, maybe that’s it. Herring continued on his Twitter account: “I love this sport, but I owe it to my family to stop giving them these moments.”

The Resorts World Event Center is also positioning itself as a viable partner for promoters like Top Rank to introduce names to the boxing landscape. Rising lightweight Giovanni Cabrera (20-0, 7 KOs), a former Chicago Golden Gloves champion, came close to qualifying for the 2016 Olympics. On Saturday night in Las Vegas, Cabrera beat Elias Araujo in a 10-way decision rounds.

The 27-year-old, coached by the highly respected Steven Feder and trained by Hall of Famer Freddy Roach, expressed his appreciation for his journey that took him through the swanky facilities of Las Vegas.

“Growing up, I wanted to be a champion. You can’t want to be on top of the boxing world and not fight in this city. Las Vegas is still the capital of the fighting world; there’s no place like this. It’s different from other cities because there’s so much experience here. The place, here, everyone I’ve met at Resorts World has made everything flow.

Feder, a longtime boxing veteran, has seen many sights around the world. “Any time you come to a new place it’s a memorable experience. Especially with a kid like that. He has huge potential. He made it 18-0 with minimal help. His previous coaches gave him a good foundation, now he’s with a world-class team led by Freddy Roach.

As of this writing, no additional boxing events are scheduled for Top Rank through 2022. However, a return to Resorts World Las Vegas has also not been ruled out.