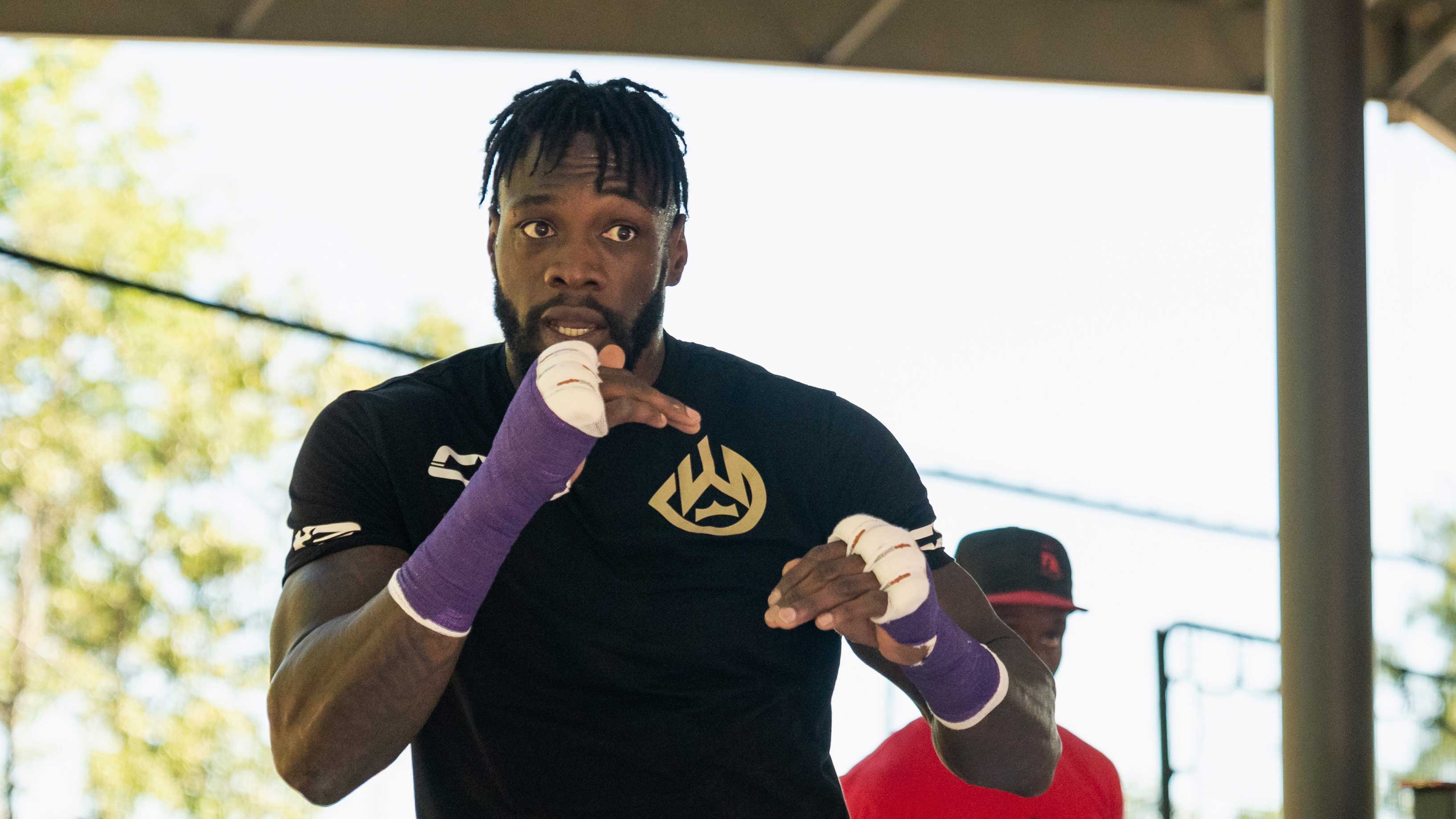 The “Bronze Bomber” talks about strategy and everything he’s been working on as he prepares for his third meeting with Tyson Fury on Saturday October 9 on a pay-per-view basis.

Wilder will look to win back that WBC title when he meets the current champion, Tyson Fury, for the third time this Saturday, October 9 at T-Mobile Arena in Las Vegas, live pay-per-view (9 p.m. ET / 6 p.m. PT).

The 6-foot-7 “Bronze Bomber” had stopped all 40 men he faced before fighting the 6-foot-9 Fury for a draw when they first met in December 2018. Fury (30-0- 1, 21 KOs) stopped Wilder via seventh-round TKO in their February 2020 rematch, giving the longtime champion his first loss.

Wilder is ready for revenge when they reunite on Saturday night.

“We saw the best of Fury – the boxer and the aggressor,” said new head coach Malik Scott. “But Deontay didn’t go to the body or use the jab as he should have, so in neither of the first two fights we saw the better Deontay Wilder.”

“You’re going to see these aspects and more in this third fight of the trilogy. And he will become the double heavyweight world champion.

Here’s what Wilder had to say as he wraps up camp for the most important fight of his career.

How did the training camp go?

DW: My head coach is Malik Scott, and [former head trainer] Jay Deas is definitely in the camp. As always, my training camp is in Alabama, and there is no place like my home.

I go to two locations, one of them is the New Era Boxing Gym in Northport, Alabama, and also Bomb Squad Island, which is my own home.

There is no distraction at all. No matter where I go, when I’m training and it’s time to fight, people respect that and they give me my space.

They will talk, encourage me and they are with me throughout. Here I get motivation, energy and encouragement from all types of people.

Do you knock out guys in sparring?

DW: I always put someone on the canvas. How many times? At each camp, I drop someone, injure them or break something on their body.

That’s why, with my training partners, we always change them every week. We change it every two turns.

Most of my sparring partners don’t do more than two rounds and then they go out. That way they can last and we can get the most out of these guys.

In previous interviews you have said “I am going to be calm but violent.” Explain this.

DW: I will be calm in the ring means my mind will be clear. That way I can quickly release combinations and do the things we worked on at camp.

Whether I climb high or low, I pivot, walk sideways, counter, it will all be done with a calm that allows your mind to process. I can’t be too aggressive like I was in the first fight.

The first time around, I only visualized knocking out Tyson Fury, which I actually did. That’s what happened on the 12th round, so it was “Mission accomplished”. I just didn’t have the credit. I was too anxious.

What adjustments do you make, mentally and tactically?

DW: This time around, there is going to be a reversal. I will be calm and able to see more and react, not only when I apply pressure, but also when my opponent does.

I am able to see things and to better judge what will be my next move or aftermath. The violence part means that every punch will mean something: I want them to hurt.

When you’re violent, you tear something up. Against Tyson Fury, my punches will be as hard as possible, including to the body. When the opportunity arises, we will also test it at the bottom.

Which of your fights best illustrates your example of “violent calm?”

DW: When you say calm, you mean Bermane Stiverne’s second fight. It was just outright annihilation.

But everything I did in this fight I performed with patience and calm, from the way I pivoted to the way I came with the right hand.

Bermane Stiverne’s fight is a perfect example of how you use your power, flip your right hand, and stay calm as you deliver that power.

That’s what we’re working on, and we’re perfecting that aspect of my game, especially directing all that power for its deadliest impact behind my jab.

Will your jab be important to face the bigger Fury?

DW: Absoutely. We work a lot with the jab. The jab sets everything in place, and I have a great jab when I use it. We have a target set on how many jabs we want to throw per round.

We do instinctive muscle memory out of it, setting a goal of throwing about 25 jabs per lap, but I throw a lot more than that and I do it without hesitation.

It became extremely fluid and second nature to me. Dominic Breazeale’s fight was good to watch for how well I can use my jab effectively, and the first fight with Bermane Stiverne.

At one point against Stiverne, I threw six jabs back to back. Against Johann Duhaupas, I showed more inner play than anything else, but the jab went pretty well.

How do you reproduce the sequential moments that produced the Tyson Fury knockdowns?

DW: No heavyweight has a faster, more powerful one-two than I do, and we’re working to create, recognize and capitalize on that great opportunity behind the jab and combinations.

My body and legs are so long that I can cover a lot of space in a short period of time, so that’s what we worked on, and the two knockdowns against Tyson Fury were definitely at the right time and at the right time.

Can you clarify and, if so, how does this fight end?

DW: I was able to cut Tyson Fury in that first fight. The first knockdown was in the ninth round over the top of the head, and the second was a quick and gorgeous three-piece combination – a blow to the face, right to the head, and a left uppercut. Snap.

So it’s not only my power but also my speed. People don’t realize how fast I really am until they’re in front of me. So we’re going to stay calm and create more of these openings.

Then when the opportunity presents itself, we’re going to be explosive, get close, cover a lot of ground, and do it all in a very short time.

I was born with ultimate power, and you’re going to see a rebirth of what happened in the first fight much more effectively in this fight. This fight is going to end early. I am not paid for overtime. It’s gonna be a short night.

This fight won’t last five rounds, so don’t blink, because in the end my hands will be raised in the air in victory. If they didn’t get the memo and didn’t recognize me the first time, then the second time, I’ll do them.

This is a brand new, refurbished and rejuvenated Deontay Wilder who will re-enter the world as a two-time heavyweight champion.

For a closer look at Deontay Wilder, check out his fighter page.