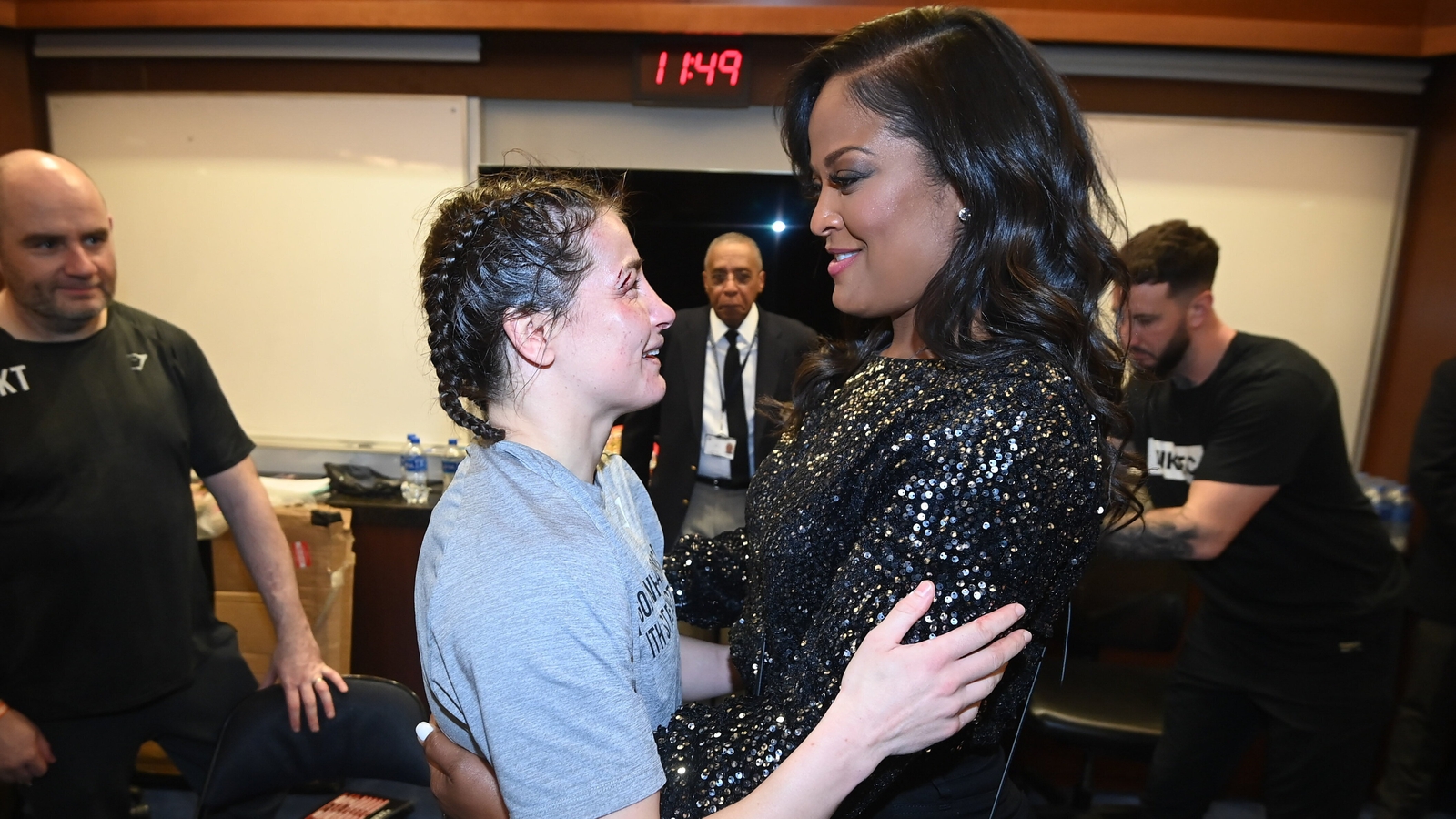 On top of the greatest sporting moments of Katie Taylor’s life, the undisputed lightweight champion also landed the biggest achievement of her highly decorated career.

A remarkable suggestion given the success that followed the Irish superstar throughout her illustrious history, becoming world amateur champion, convincing the IOC to allow women’s boxing in the Olympics and winning gold at the London 2012 games.

And they were just amateurs.

The inimitable athlete turned to the sport’s paid ranks in 2016 and continued to dominate the lightweight division, while continuing the crusade to see women’s boxing achieve some sort of recognition over the male-dominated sport.

Moments before Katie made that slow, methodical walk to the Madison Square Garden ring for New York’s most historic night, where women’s boxing headlined the legendary venue for the first time in 140 years. of history, the big screen displayed a message that Taylor had written to promoter Eddie Hearn, asking him to take a chance and join her on the journey.

Hearn has been telling this particular thread for a few years – and like all great stories, it just gets better and better the more it’s told, even without embellishment.

But this time the boxing promoter, who is also at the top of his game right now, knew it wasn’t just the boxing world watching, but the entire global sports community.

Some have heard this story many times before, but many weren’t actually listening, including the promoters and TV stations who decided to put the Shakur Stevenson vs. Oscar Valdez fight against the New York showdown.

This unified world super featherweight bout would have been a great fight any other night of the year, however, April 30, 2022 will be remembered for just one boxing match.

That evening at Madison Square Garden will in fact go straight into the history books and will go down there as a defining moment in sports.

Mecca of boxing. A place like no other, and from now on the name of Katie Taylor will be associated with it forever, just like “The Greatest”, Muhammad Ali.

And while the event was historic, the fight itself was equally epic as both fighters got the best out of each other, and the barnstormer has already been named as a true contender for the fight of the year – the tenth round of the New York tear-up will also remain one of the great verses of this most poetic sport.

And credit must go to the challenger, who was truly the right woman to complete this historic package, bringing her seven-weight world title pedigree to the occasion, while also being aided by the emerging presence of Jake Paul who brings the boxing to another audience and adding to this most show business of shows.

Serrano had never stepped into the ring with anyone as tough or talented as Taylor, and while much was said about her power punches, it was an unknown quantity compared to sharing the ring. with the true pioneer.

Round five of that particular punch will forever be remembered as Serrano’s brilliant pass and the “what if” moment of his long career. Without a doubt, Serrano will be headlining his own shows going forward with or without Katie in the opposite corner.

And even though the contest was close – too close to call many – the outcome was definitely the right choice, and with that being labeled the “For History” fight, it just had to be Katie Taylor.

But that conversation will continue, and it continued until the post-fight press conference; the 45-minute wait for the boxers to arrive led to a riveting debate between anyone and everyone within shouting distance as the world’s boxing writers and commentators relived the thrilling ten rounds.

Someone produced the live stream of the final stages of Shakur’s fight; no one really cared, even the few ardent ones didn’t have more than one eye on it.

The man one seat above said he was brought to Ireland to spare Barry McGuigan ahead of the Pedroza fight.

He certainly knew his Irish boxing, fondly remembering all the contenders and champions from McGuigan, through Collins and up to Duddy, whom he saw “several times” in New York.

The Pocket Rocket sparked a fond memory, as he remembered the always entertaining Wayne McCullough.

“Who is the greatest Irish boxer”, he dared. “McGuigan? »

The conversation naturally turned to Katie, and while she is recognized as the greatest Irish boxer of all time, it was agreed that she was certainly the most important, for what she had done for the sport.

It was no longer, as Eddie Hearn would evoke later in the conference, a conversation about women’s boxing, rather about boxing, period.

Others joined in as the fiery entourage wanted to hear all opinions.

“Who won it? “I got Amanda.” “A draw would have been fair.” “Katie has done enough.” “What are the judges looking for? The aggressor or the boxer?

The beauty of boxing here. Opinions. All valid. All justified.

But in the end, it comes down to the three judges sitting at ringside, calling it turn-by-turn. Ten for a win. Nine for a loss. Eight if you hit the canvas or take a severe beating.

The press conference would end up interrupting the post-fight blackout with Team Serrano coming first to face the press.

Respectful in defeat, Serrano will consider the whole experience a victory for the long and winding road she has endured since trying to make a living from the sport, with her adjacent promoter Jake Paul, no doubt, telling her she won the fight.

“The girl who sang the Irish national anthem told me that Amanda had won the fight,” Paul said, his face impassive.

When asked if Serrano should change his tactics for the inevitable rematch, trainer Jordan Maldonado opted to answer the question on his fighter’s behalf.

Expected for his antics last time when his wife Cindy, the other Serrano sister, was schooled by Katie, this time he offered nothing but praise for the champion, and he felt that no matter what Amanda was with hit her, she was going to stand there and take it all night like a real champ.

Katie would then arrive, delayed due to the suture in her eye, while blood still dripped from her left ear – nurse-turned-promoter Hearn gently wiping it when called over the next 20 minutes.

The champ admitted she was beaten in that fifth round and had to dig deep to stay in the competition, however, she also downplayed her importance, saying she wasn’t as hurt as the champions. people thought so and that she was stable and in control. back to the corner.

“I have a really good chin,” Katie would later reply when asked again about that remarkable point halfway through the fight.

Prior to the fight, Taylor spoke extensively about the legacy and the pride she feels in breaking those boundaries in boxing, pushing the door wide open for the next generation of female fighters to shine.

Understandably, with talk of a rematch in Dublin, many thought it might double as a farewell fight.

And while Katie said she was looking forward to a week without getting hit in the head, she scoffed at those suggestions, saying she still had a lot to give to the sport she loves so much.