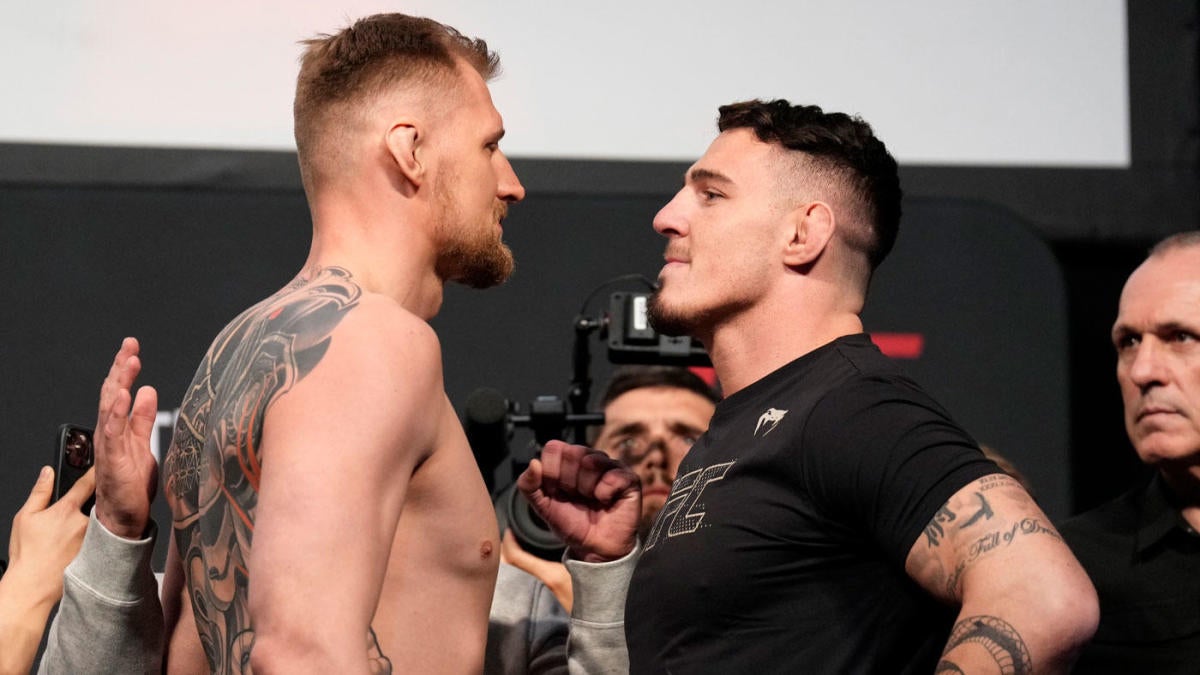 Alexander Volkov and Tom Aspinall are racing to make a splash in the UFC heavyweight division. Volkov vs. Aspinall headlines the UFC’s return to London at the O2 Arena on Saturday, March 19.

Volkov (34-9) has looked impressive through 11 UFC fights, but he’s always fallen short of title contention. A win over Aspinall is unlikely to catapult ‘Drago’ into a title fight, but it could reward him with a title eliminator and the opportunity to change his fortunes for good. Volkov enters UFC London as a much more experienced fighter, more than tripling Aspinall’s total number of fights and wins. One can imagine the edge experience should be soothing for Volkov, but this fight will take place in front of a hostile crowd.

Aspinall (11-1) is gearing up for a breakout moment at UFC London. A win over a battle-tested contender like Volkov would propel Aspinall to the shortlist of heavyweight contenders. The only UFC top 10 heavyweight fighter on an active winning streak is Tai Tuivasa. Beating Volkov likely puts Aspinall in the middle of the division and could set him up for a title eliminator. Buoyed by a four-fight winning streak to kick off his UFC run and a standing ovation from his fellow Englishmen, Aspinall is firing on all cylinders. The 28-year-old has shown incredible composure inside and outside the Octagon, so don’t expect the importance of UFC London to overwhelm him. Aspinall has already convinced many of its upper limits. UFC London is his chance to live up to expectations.

Can’t get enough of boxing and MMA? Get the latest in combat sports from two of the best in the business. Subscribe to Morning Kombat with Luke Thomas and Brian Campbell for the best analysis and detailed news, including a full UFC London preview and what to expect in the main event below.

“Honestly, I think I’ve improved more in this camp than I have in the last two years,” Aspinall told reporters on media day. “I feel so good. I also feel good mentally, like I’m just there to enjoy it – but that’s what I’m focused on: just enjoying it. I don’t even think about the outcome, to be honest I don’t even think about how I’m gonna finish the fight or if it’s gonna go the distance I don’t give a fuck I’m just gonna go out there and have the time of my life It’s my dream , and I want to enjoy it.

The UFC London co-main event welcomes Dan Hooker to the featherweight division as he looks to correct his trajectory after losing three of his last four fights at lightweight. It will be a tough first step for Hooker, who finds himself up against ranked featherweight contender Arnold Allen. Marked by inactivity, fighting once a year on average since 2015, Allen has otherwise looked solid and is undefeated in eight UFC bouts. Hooker’s high-octane punch meets Allen’s smothering wrestling skills in a fight that will have a significant impact on every fighter’s career. You can click here for more fights to watch on Saturday night.

Plus, Paddy Pimblett is back in action in his England backyard when he takes on Rodrigo Vargas in a featured slot. The former Cage Warriors champion made an exciting UFC debut against Luigi Vendramini. Pimblett bounced back from previous adversity and knocked out his opponent in the first round. It was far from a perfect performance, but the thrill and chaos go hand in hand with Pimblett’s appeal. Vargas is only 1-2 so far in his UFC career.

Here is the fight card for UFC London with the latest odds from Caesars Sportsbook.

Alexander Volkov vs. Tom Aspinall: Volkov only lost to UFC heavyweights on the cusp of title shots: Ciryl Gane, Curtis Blaydes and Derrick Lewis. Aspinall has scored an A+ on every fight he has had in the Octagon. Expect Volkov to rely on his height advantage. It has a small, but noticeable advantage in height and reach. It’s his physical setting, however, it’s much better. Keeping Aspinall on the end of his punches and rushing when Aspinall punches are important tools for the Russian to use. Aspinall has a great overall game: crisp, technical boxing paired with wrestling and jiu-jitsu skills. The 25 minutes the UFC has allocated for this fight could make a huge difference for Volkov. The Russian has gone five full rounds twice in the UFC, four rounds against Fabricio Werdum and numerous 15-minute bouts. Aspinall, on the other hand, can point to a TKO victory over Andrei Arlovski in six minutes and nine seconds as his longest performance in the Octagon. Aspinall may be the real deal, but until that’s proven, I’m going to side with the much more experienced Volkov to raise my hand after a frustrating 25 minutes. Volkov via UD

Who wins Volkov versus Aspinall? And what other choices do you need to see? Visit SportsLine now for detailed top picks on UFC Fight Night, all from the insider who has earned over $10,000 on MMA picks over the past two years, and find out.