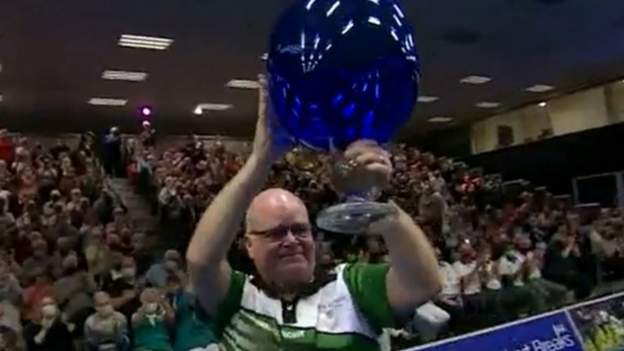 Scotsman Foster, 48, slammed some members of the Norfolk crowd for jeering at his bowls after he let the lead slip away in the first set and tie-break.

Gillett, however, fulfilled a childhood ambition just to reach his first final before triumphing 8-7 4-12 2-1.

Gillett added: “I’m proud of myself. I don’t think any of us played our best, but it’s a different beast in the final and I hung on again.”

Foster was looking to win the title for the first time since 2017 and match the six clinched by compatriot and doubles partner Alex Marshall. It would have added to the mixed duet title he won earlier in the week with Alison Merrien of Guernsey.

Scoring three goals in the sixth end helped the Scot establish a 7-3 lead, but Gillett, who had beaten Marshall in the semifinals, secured the first set with five straight singles.

Foster, seeded fifth, kept control of the second set from when he scored three goals in the second end and looked set for a historic victory after winning the first end of the tie-break.

However, he failed to draw the pallina with the last ball in the second end – and sixth seed Gillett had his last ball called by the decider.

A disappointed Foster said: “It’s not sour grapes and I know most fans want Les to win – he’s a worthy champion. But when two guys fight here and some people laugh at your bowls , it is not pleasant.

“I wasn’t far off my best and to be honest I let it slip away after leading 7-3 in the first. I didn’t make my A game today.”

The defeat robbed Scotland of a trio of titles at the Potters Resort in Hopton-on-Sea, with Stewart Anderson and Darren Burnett winning the men’s pairs for the second time beating reigning English champions Mark Dawes and Jamie Chestney.